Was Run Lola Run a fluke or what? When released a decade ago, that frenetic crime thriller landed on many a critic’s Top 10 List for 1999, present company included. But despite being subsequently afforded considerably-bigger budgets, German director Tom Twyker has never managed to make another movie which measures up to Lola either in terms of intensity or cinematic capture. Perhaps a perverse variation of The Peter Principle is coming into play, since Twyker appears to be over his head helming a Hollywood blockbuster as opposed to a modest, art house indie.

Case in point, The International, an overly-ambitious political potboiler starring Clive Owen and Naomi Watts. The film was shot on an array of exotic locations stretching from New York to London to Berlin to Potsdam to Milan to Istanbul. Plus, it features a life-size replica of the Guggenheim which provides the setting for a dizzying shootout inside the museum on its instantly-recognizable circular ramp.

The very timely plotline revolves around the efforts of Interpol Agent Louis Salinger (Owen) and Manhattan Assistant D.A. Eleanor Whitman (Watts) to crack an intercontinental money-laundering operation hatched somewhere inside a conglomerate called the International Bank of Business and Credit. Seems that the IBBC has cornered the market on small arms and is about to broker a deal between China and Middle East nations hostile to Israel for guided missiles capable of reaching Tel Aviv. 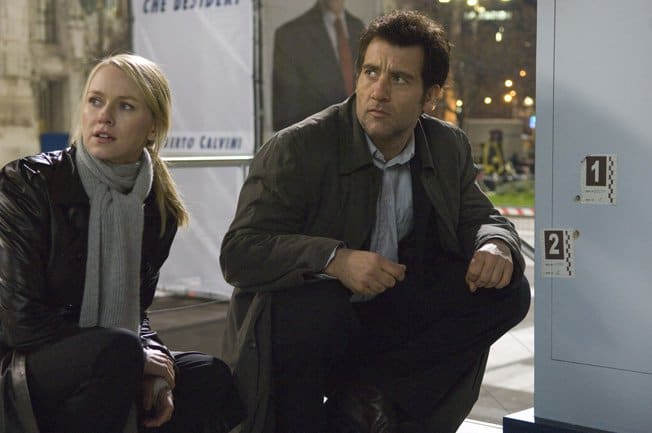 The point of departure is Berlin where we find ready-to-rumble Salinger partnering-up with relatively-refined Whitman in the wake of the death of her partner (Ian Burfield) under suspicious circumstances. Turns out the dearly-departed wasn’t the first person investigating the IBBC to die in a freak accident or to disappear entirely.

What ensues is a globe-trotting game of cat-and-mouse which takes the pair to plenty of places where neither technically has jurisdiction to operate. After all, Salinger works for Interpol which in the real world is a fairly toothless outfit about a step above dogcatcher, while Whitman, as an attorney, isn’t even a law enforcement officer at all.

Nonetheless, he behaves like your classic gun slinging rogue who ignores the rules, much to the chagrin of the goons he bests with the help of cartoon physics and a body ostensibly impervious to bullets. And her job is to play the damsel-in-distress and to soothe the savage beast by cooing seductive questions like, “When was the last time you got laid?” which prompts the fairly predictable response “Why, are you offering?”

Perhaps because English is not the director’s native dialogue, much of what’s supposed to pass for credible dialogue has the characters talking in trite, fortune cookie-speak, such as “Sometimes, a man can meet his destiny on the road he took to avoid it” and “Sometimes, the hardest thing in life is knowing which bridge to cross.”

Yeah, and sometimes, a script is so pathetic, the picture should never have been greenlighted.

To see a trailer for The International,