One of the most satisying movie experiences, for audiences along with the actors too, is when the cast seems to be having as genuinely wild a time as you are, way beyond just a job, in playing off one another in the film. And if they’re a bunch of rambunctious male characters, as in The Golden Boys, the exhilaration of guy bonding for the cameras is more than apparent, even when barking ferociously at one another in negative male bonding and unbonding mode.

A splendid early 20th century post-seafaring comedy, The Golden Boys flirts with that highly unpredictable emotional juncture between buddy love and the urge to mate with the opposite sex. And the sheer delight of this salty elder boy talk outing, characterized by lifelong fierce courage on the high seas but acute commitment panic when females are in the vicinity, is how creatively goofy this collection of confirmed and born-again bachelors can be when fleeing romance. 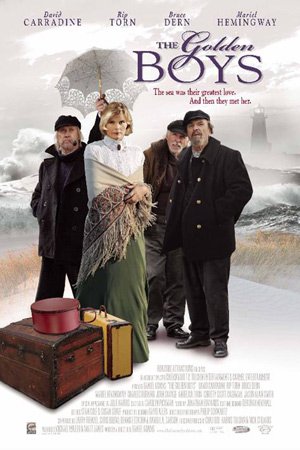 Written and directed by Daniel Adams and based on the Joseph C. Lincoln novel, Cap’n Eri, The Golden Boys is a flaky antique of a tall tale about three retired Cape Cod sailors – Captain Zeb (David Carradine) Captain Jerry (Rip Torn) and Captain Perez (Bruce Dern)- who have settled as reluctant roomies in a supremely disorderly house. Literally fed up with one another’s cooking, from ‘bad goose’ to clam fritters that even the cat won’t eat, and with everyone refusing to do the dishes, the clever old coots conspire to place a want ad for a wife to do all the clean-up. One wife, that is – since they’re all so averse to the notion of marriage – and with the other two signing on as boarders.

With this peculiar aim in mind – marriage to make, not a woman but other men happy – they toss coins to pick the unfortunate prospective groom. And when no nonsense widow Martha (Mariel Hemingway) turns up after answering the ad, the trio is, well, pretty much lost at sea as to who can run fastest in the opposite direction. At the same time, the town is up in arms about a liquor enterpreneur interloper, and this weaker sidebar plot materializes around a rum arsonist crime caper.

The Golden Boys is quaint, folksy fun about a time when inkwell pens and horsedrawn buggies ruled, and the blustery sailor lingo is as vibrant and deliciously witty as anything those young Superbad varmints could conjure. Shipmate bonding collides with unscheduled infatuation in this homespun and heartwarming, vintage fiddle music-laced yarn. And where the sparks may eventually end up flying, has absolutely nothing to do with how those coins get tossed.