Equal parts kung fu fever and fluff, The Forbidden Kingdom is a joint US and China co-production, and it shows. The eagerly anticipated first ever collaboration between reigning international martial arts screen celebs Jackie Chan and Jet Li, this cross-cultural collaboration begins as most outings tend to do in America and now likewise in China, what with the invasion of the new market economy – shopping.

Michael Anganaro of 24 is Jason in The Forbidden Kingdom, a South Boston teenage loner and daydreamer hooked on martial arts movies, who stops by his favorite Chinatown seedy pawnshop to nab some fresh bootleg copies of his favorite kung fu kick-butt DVDs. It might have been the end to just another uneventful day on the bottom feeder side of Beantown, until the neighborhood bullies barge in to rob the joint, then shoot the elderly shopkeeper in the chest and chase Jason up to the rooftop edge, where he’s just about to tumble over.

But an antique wooden staff with rumored magical powers that Jason grabs from the store as he flees, dispatches him way back in time in an unscheduled detour to ancient China on his way to, well, the afterlife. Here those baby-faced muggers are replaced by hordes of knights in shining armor with bad attitudes, as they plunder and execute with glee. 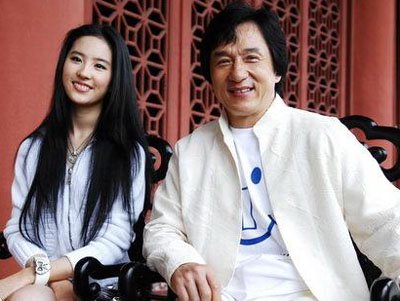 Not to worry, Jason is sorta saved by drunken martial arts maven, Lu Yan (Jackie Chan), as they face off against a fearsome warlord who’s turned the kindly Monkey King (Jet Li) into stone. Along the way to righting all wrongs and returning the enchanted staff to the Monkey King before Jason can just get to go home, the enigmatic Silent Monk (Jet Li again) turns up, with a possible hidden agenda of his own.

Soon Jason is no longer just speaking softly and carrying a big stick, as the three team up to defeat the often airborne evildoers, chasing them across deserts and over mountains without benefit of i-Pods or the Internet. To get this flabby American teen couch potato in shape, Yan and Silent Monk teach him some cool moves, a kind of kung fu 101, in addition to a training regimen that includes literally beating around the bushes.

In these elaborately choreographed, equal opportunity beatdowns courtesy of Crouching Tiger’s Yuen Wo Ping, there’s also a feisty chick with a lute they pick up along the way, and a freaky, bullwhip wielding battling sorceress who turns up, with dangerous extra-long white tresses that give new meaning to hair as a deadly weapon. Or at least as a toxic source of accessory to bodily harm. Eventually Jason figures out that all this turmoil is about everyone competing in a fountain of youth brawl to get immortal. Hey, they could have just asked Sylvester Stallone what he’s been taking.

But with a seemingly far less focused strategy than all these floating daredevils, The Forbidden Kingdom veers between kid tall tale, nutty comedy, and martial arts extravaganza with no clear focus. There’s also an annoying, raucous score that tries to keep bullying the audience into how to feel. Meanwhile, Chan engages in some sort of weird identity crisis, alternating between silly nitwit to Li’s impassive straight man, while attempting to show off his smooth moves in a stumbling drunken stupor.

There are also diminished returns connected to the otherwise stunning, gravity-defying fight scenes, knowing that so much of it is hi-tech digital US production values at work, and a little heavy on the dressing courtesy of the costume department. Rather than the raw power of all-natural organic muscle and sweat. So in a way, the real victor in all of this, is the new market economy.