More suited to a sexually themed brawl on Gary Springer than a WWII period Blitzkrieg bohemian romp, The Edge Of Love seems to have layered this tawdry tale with the persona of legendary Welsh poet Dylan Thomas simply as a box office hook. And this while the designated objects of Dylan’s multiple desires – Sienna Miller and Keira Knightley – appear to have wandered, armed with their respective enormous talents, into the wrong movie.

Keira Knightley is Vera Philips, a retro-trendy nightclub torch singer excessively smoking and wearing too much lipstick. A childhood chum and sometime lover of Dylan’s, Vera initially freaks when his surprise wife Caitlin (Sienna Miller), the mother of his child, turns up, but then warms to her as a new best friend. No shrinking violet or mere domestic house pet, Caitlin is a brash, bubbly Irish former showgirl, sort of the Britney Spears of her day, who does impromptu cartwheels in saloons minus undies. As Caitlin explains, ‘what do you need knickers for, when you’ve only got to wash them?’ 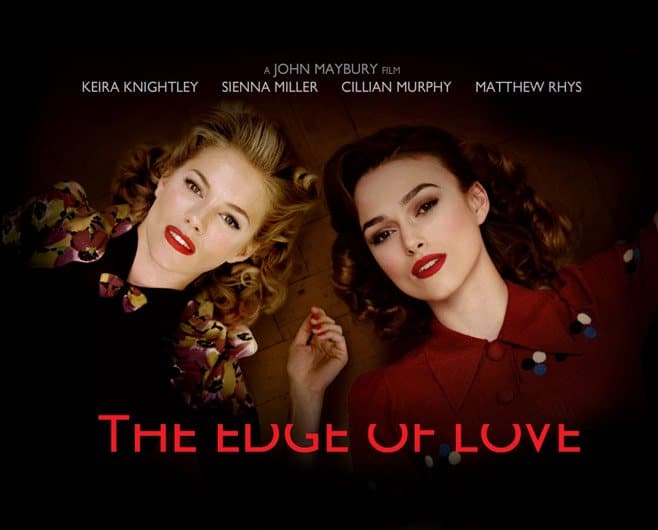 At the same time, Vera is pestered into marrying William (Cillian Murphy), a stalker solider on leave whose persistent advances she bluntly spurns at first, because ‘you might be dead tomorrow.’ But when the far from blushing new bride finds herself pregnant, William turns violent and more than suspicious that paternity resides with the randy poet. Which lands the entire free love menagerie in court, and nastily at each other’s throats. Paging Nancy Grace.

Director John Maybury is widely recognized as a video artist and painter, and it shows. Seemingly more concerned with the undoubtedly lyrically conceived landscapes, he ironically presents scenic visuals that are more poetic in concept than the famed writer protagonist himself. But with dialogue sounding more like a series of scandal-ridden sarcastic soundbites than authentic or even intelligent conversation, this crudely conveyed tabloid cinema unfolds as less about characters we’re encouraged to believe were uncommonly full of life, than empty and shallow narrative gossip preempting poetic genius.