If forty is the new thirty in Hollywood, then eighty is likely the new one year old, at least according to The Curious Case Of Benjamin Button. More than curious and bordering on just plain silly, even though originally penned by F. Scott Fitzgerald who must be fidgeting in his coffin, the film is concocted by Forrest Gump screenwriter Eric Roth and directed by David Fincher (Zodiac, Fight Club), which should give you more than an idea of the clashing sentiments that rule here. Or in other words, like the unfortunate literally backwards looking Button who is born in an elderly state and dies decades later as a newborn, the story begins promisingly with heavily marinated food for thought, and drifts towards a weepy ending that is as light as a feather.

Brad Pitt is the Benjamin Button in question, the deformed geriatric fetus whose mother dies in childbirth on the eve of WWI as a town clock begins to tick in reverse, and whose horrified dad surreptitiously drops him off on the steps of the local New Orleans old age home, after stifling thoughts about drowning him in a river instead. Ben is raised by the kindly nurse there (Taraji P. Henson) who discovers him. And since it’s a residence for the elderly, he fits in just fine. 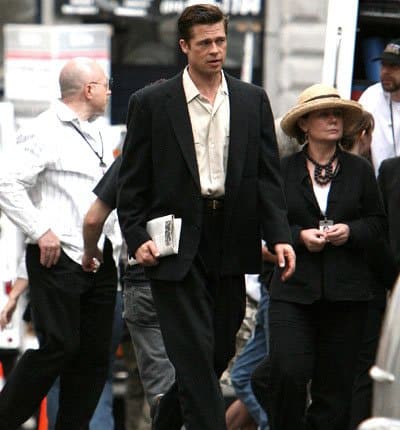 Life even improves substantially for Ben as time passes, since he’s looking younger every day, no exaggeration. But entering the world clueless and old, and then bearing too much knowledge about life for his own good down the line when he’s just a kid, makes existence for Button a tad problematic, though oddly dull for the rest of us. And Pitt just appears to float passively through time, seemingly assigned the role of blank slate upon which others around him cast their disoriented impressions and emotions.

Among the unfortunate who cross paths with now world traveler Ben is Daisy (Cate Blanchett), a child he meets as an old man, and whom he later falls in love with as his youthful hormones are raging, and she’s slipping into midlife crisis. The story in fact unfolds at Daisy’s death bed in the present back in New Orleans, as the withered old woman now approximates Ben’s age at birth, and she chronicles her doomed relationship with the guy to her distraught daughter Caroline (Julia Ormond).

The most that can be said for these recurring bedside scenes, is that everybody concerned sighs and weeps a lot, until you’re barely able to control the urge to blurt out hey, just knock it off already. Though these grim intermittent episodes do provide an anchor to those vignettes with Ben as he grows repeatedly young, a suspension of disbelief which may be sorely trying audience sanity, as all rational caution is just about thrown to the wind, in the extreme. And by the time Daisy is clutching her longtime object of erotic desire as he squirms around in her arms in diapers and all of one foot long, let’s just say that it’s more than a little on the kinky side.

Clocking in at a punishing 167 minutes and no, not in reverse time, The Curious Case Of Benjamin Button is a wearing ordeal, at the conclusion of which you’re likely to feel a whole lot older than 167 minutes, and really drained. Pass the Dexedrine.