If corporate media is notorious for reporting only what they deem politically or personally expedient – and other stuff, even if involving up to a million protesters at an event, never happened – the official historical record may be even worse. Take for instance, the military trial and execution by the feds for conspiracy in President Lincoln’s assassination of the first woman in history, Mary Surratt. Mary who?

Now, that dubious military hanging of a US civilian is being brought to the screen by director Robert Redford on the anniversary of that April 14th Presidential assassination, in the potent docudrama that resonates with political and emotional intensity today, The Conspirator. Redford has compiled with a commanding lean and masterful style the many startling, substantially buried facts as they ensued back then. And connecting that historically, deeply rooted urgency to round up scapegoats, in assembling the most unusual suspects during periods of national hysteria and sorrow such as the current war on terror. And while in a desperate national quest for closure, however irrational. 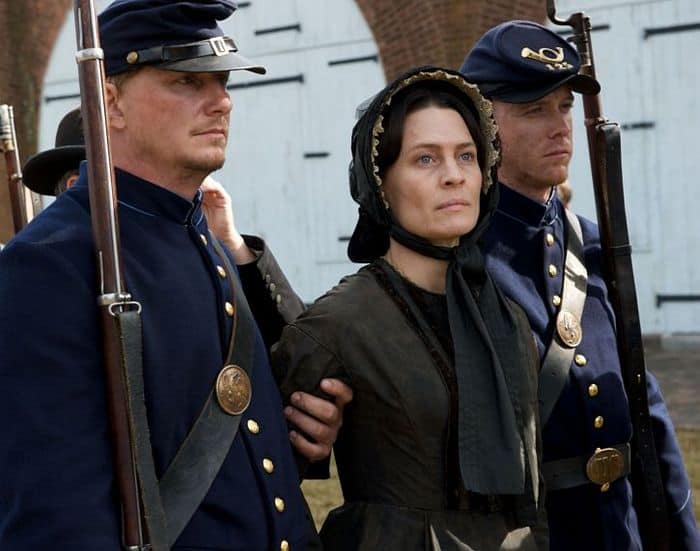 At the same time, Redford was wise to choose for his conspiracy theory military metaphor a case in history so reviled as the Lincoln assassination, to highlight the principle that everyone no matter what the crime is entitled to a fair trial by peers and not a virtually predetermined judgment via military tribunal. As in the current situation concerning detainees at Guantanamo and secret US prisons elsewhere, and including the questionable army detention and treatment in the Wikileaks charge against Bradley Manning. Whose own case reverberates within this film – as does the precarious situation of dissenting voices against the US government in general, potentially condemned for what they may merely be thinking.

Robin Wright stars as Mary Surratt in The Conspirator, a middle aged widow and owner of a D.C. boarding house, where alleged pro-Confederacy plotters, including her son John, were charged with holding meetings on the premises. And as fighting was still taking place on battlefields, even though there had been a declared surrender just days before.

And since John had fled to Canada, it may have been the case that his mother was arrested and charged instead in conspiring to assassinate Lincoln. But whether as symbolic revenge against the South, a ploy to lure John back or out of frustration that he wasn’t available, the national obsession with villains no matter how fictional – along with the temptation to draw comparison to rounding up suspects in the absence of Bin Laden – is palpable throughout.

Denied a civilian trial, Surratt is dragged before a tribunal of outraged generals just back from the war, who refuse to allow her to speak in her own defense, deny her young novice lawyer (James McAovy) any motions or knowledge of those testifying against her, and grant immunity to a key witness or two, in exchange for gravely damaging testimony against the virtually entrapped defendant. Even as a court writ recommending to President Johnson that she receive life imprisonment instead, seems to have oddly disappeared, as Surratt is dragged off to the gallows instead. Johnson later claimed he had no knowledge of the writ, even though the historical record indicates otherwise.

Surratt’s son John was eventually caught and put on trial. But by then, a law had been passed declaring that civilians can’t be hauled before military tribunals, and he was tried and freed. As for Mary – described in the press back then as attractive and bosomy – tickets for the public throngs to attend her outdoor execution were a hot item indeed. While pieces of the rope that hanged her and locks of her hair, were then sold as souvenirs.

And not mentioned in the movie, is that she was shackled and hooded, Abu Ghraib fashion statement style, every minute of her several months incarceration, supposedly as a measure against suicide. Though her protests pertaining to her inhumane treatment, were alternately dismissed as arising from the monthly ‘woman’s curse’. And Mary was buried still hooded in her coffin along with the three likewise condemned men by her side, led to their deaths heavily manacled and dragging 75 pound balls. As for her offense that may have been no more than owning property later deemed a crime scene, President Johnson had this to say about the matter: She “kept the nest that hatched the egg.”

On a side note, Mary Surratt’s cousin is F. Scott Fitzgerald (and by extension, Francis Scott Key) – the iconic author famously known as that narrative chronicler of Jazz Age Gold Coast, Long Island decadence. And whose own life is encapsulated ironically, in Beloved Infidel.