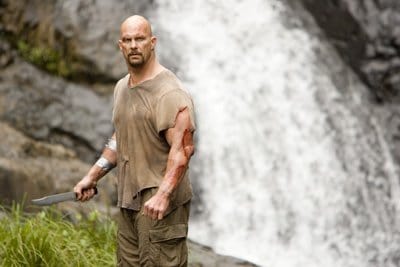 TV producer Ian Breckel (Robert Mammone) has come up with a novel idea for a reality show. Take ten Death Row inmates from prisons scattered around the Third World and drop them onto a deserted island outfitted with hundreds of hidden cameras for a fight to the death. Broadcast the grisly goings-on live over the internet, charging pay-per-viewers $50 apiece to tune in. And as an added incentive to insure enthusiastic participants, attach a time bomb set to detonate in 30 hours to everyone’s leg, and promise the victor his freedom and a bundle of cash to start a new life.

This is the intriguing point of departure of The Condemned, a high attrition-rate flick featuring former WWE Wrestling Champ Stone Cold Steve Austin. The movie was written and directed by Scott Wiper who was undoubtedly inspired by the Richard Connell’s literary classic “The Most Dangerous Game” a novella which was made into a movie starring Lon Chaney and Fay Wray back in 1932.

That flick, in turn, has spawned innumerable “human as prey” scenario knockoffs, including Open Season (1974), Battle Royale (2000) and Surviving the Game (1994). The Condemned is perhaps most similar to The Running Man (1987) and Series 7 (2001), sharing not only their “last man standing” theme but also their “televised contest” aspect also. 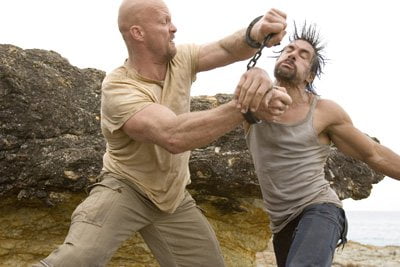 Fortunately, the film is visually riveting enough to make you forget its absence of originality. The picture wastes little time in plunging you right into the action, for the first casualty occurs when one of the convicts balks at jumping out of the helicopter which has ferried them to an uncharted isle located somewhere in the Pacific. Instead of going into the ocean willingly, this ill-fated felon is pushed out belatedly and ends up impaled on a mammoth stake on the beach.

The rest of the rogues’ gallery is comprised of a colorful menagerie of murderers. There’s a Nazi (Andy McPhee), a Russian strongman (Nathan Jones), a Japanese martial arts master (Masa Yamaguchi), a husband-wife team of serial killers (Manu Bennett and Dasi Ruiz) from Guatemala, an African girl gone wild (Emilia Burns), a ghetto gangsta’ (Marcus Johnson) gone gaga over the sister, yada yada, you get the idea.

But any idiot can figure out from the beginning that this no-holds-barred smackdown is inexorably leading to a big showdown between the noble Jack Conrad (Austin) and the dastardly Ewan McSorley (Vinnie Jones), ala your typical WWE spectacular. Button-lipped and beefy, macho Conrad admits only to being an “interior decorator.” 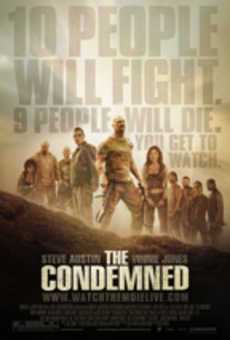 Yet it’s clear that this red-blooded American had been unfairly imprisoned in El Salvador, leaving a hot blonde (Madeleine West) with a couple kids worried about him back in Texas. By contrast, McSorley is an irredeemable misanthrope who set fire to an entire village in Rwanda before raping nine women. And it is just as obvious that the show’s greedy and amoral mastermind, Breckel, will have to get what’s coming to him, too, if there’s any justice in this world.

Despite the transparent plotline, the dumb dialogue, the cheesy special f/x, the cornball comic relief and the self-righteous sermonizing, this campy B-movie adds up to a slumming cinematic experience so godawful, it’s great, in a reverse chic sort of way. What’s good for a tongue-in-cheek homage like Grindhouse, is even better for a shameless embarrassment like The Condemned.