While history moves along on its own momentum, often in mystifying, sweeping grand panoramas with the media breathlessly behind and barely playing catchup in the heat of the moment, moviemaking seems to be at an even greater disadvantage. In other words, docudrama is rarely in synch with the march of historical events, even with the advantage of any substantial passing time and ample pause for reflection, compiling recreations on camera that more often than not grotesquely pale in comparison.

Not so with German filmmaker Uli Edel’s The Baader Meinhof Complex (Der Baader Meinhof Komplex), a multiple biopic scrutinizing and bringing back to life from the 1970s, Germany’s politically incendiary Red Army Faction and its numerous key players. Adapted by screenwriter and producer Bernd Eichinger from Stefan Aust’s seminal RAF chronicle of the same name, The Baader Meinhof Complex is anchored on neutral, journalistically minded ground, while simultaneously juggling the group’s confused motivations in the context of the period’s global movement for idealist change. And graphically placing their wrongheaded violent strategies on display.

This exhaustive, information-fueled, exceedingly dramatically effective type of cinematic strategy in its own right, impresses with its broad view of history and also incorporating the contrasting views of history of its many characters as they play out, while declining the prevailing simplistic notion of history as generic action movie. And thereby also challenging the current culturally imposed one-side-to-every-story school of corporate journalism, instead basically respecting the unmanipulated intelligence of audiences to make up their own minds. 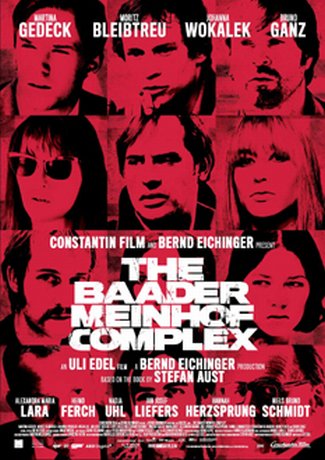 Combining powerfully recreated scenes of mass demonstrations and gatherings with the angry eloquence of revisited speeches and writings of the emerging radical youthful elements nationally and globally – especially the opening scenes of anti-Shah of Iran protests in Germany as police barricade and savagely beat the protestors, the film in essence challenges action movies, nearly always devoid of content and character, in a claim to any genuine social clarity. Especially potent is this opening which sets the stage for the increasing frustration and extremist impulses of the initially idealistic core leadership who eventually drifted into the RAF, Andreas Baader (Moritz Bleibtreu), Gudrun Ensslin (Johanna Wokalek) and perhaps the most unfathomable participant, mother and intellectual journalist Ulrike Meinhof (Martina Gedeck). And what this breathlessly paced political thriller does take time out to intimate to audiences, ironically in a film about the RAF that is opening in the US at just about the same time as Taking Woodstock, is that these young activists were originally nourished from the same counterculture core.

But in this nearly seamless historical chronicle and more-than meets-the-eye brand of moviemaking, what could have rendered it an even more impassioned and striking work, would have been dramatic doocumentation and exposure of how the rage of the ten year RAF movement, which one in four Germans actually supported, was fueled as well by the post-WII failure to indict most of the Nazi leadership and their subsequent unquestioned infiltration into many key postwar German government positions. And how Germany’s own war against terror then, was actually opportunistically exploited by that government proliferating with Nazis, to extend and entrench their own powers and crush any mass dissension.