Looking more like a ghastly demolition project than a post-nuclear dystopic 2018 LA in battered ruins overrun by mean-spirited robots, the interminably noisy, latest futuristic bone and metal cruncher Terminator Salvation is less about being great than just plain grating. Isn’t this the sort of environmental irritant audiences flee to the movies to get away from?

It seems that there are still some spunky post-apocalyptic humans around, running interference on their clunky Terminator adversaries and the malevolent think tank brains behind the heavy metal brawn, Skynet. In ragtag rescue mode, is John Connor (Christian Bale), along with a couple of youngster survivalists, Kyle (Anton Yelchin) and Star (Jadagrace). A sidbar conflict kicks in when the mysterious Marcus (Sam Worthington) turns up to presumably pitch in, with a full blown identity crisis, or else premature Alzheimers. 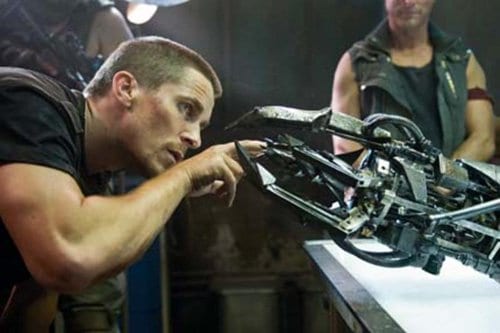 Marcus is a previously executed convict and suspicious cyborg contraption concocted in the afterlife from experimental mix ‘n match human body parts and a robot interior, and potentially in league with Skynet. But there’s a war to the death to be waged against the Terminators, so whether Marcus stopped by from the past or is a two-faced fifth columnist from the future, is sorta beside the point for now.

And even though director McG would like to throw in a bit of emotional conflict too, there’s hardly enough breathing space for that kind of quiet time, between endless rounds of boisterous battle scenes and eardrum annihilating explosions, until you could care less which side wins. So if there’s any real human passion rising to the surface amid the rubble, it’s all about the guns, baby.