When you decide to shoot a Terminator sequel sans Schwarzenegger (sorry, a cameo of Arnold’s head atop a body double doesn’t count), and with an entirely new cast, you might want to consider devoting some quality time to character development in order to give your audience a chance to become familiar with and, thus, reason to care about the protagonists. Otherwise you’ll probably end up with a superficial, sci-fi saga like Terminator Salvation (T-4), a special effects indulgence in fight sequences, chase scenes, pyrotechnics and techno wizardry at the expense of emotional depth.

This post-apocalyptic adventure is as soulless as the defoliated expanse of barren landscape on which it unfolds. What’s worse, the movie abandons the franchise’s carefully-cultivated trademarks in favor of a lot of nondescript CGI action sequences which feel interchangeable with similar flicks like Transformers and Doomsday.

Blame for this departure in tone rests squarely on the shoulders of Joseph McGinty Nichol, aka McG, who has made a rocky transition to movies after directing award-winning music videos for both Smash Mouth and Sugar Ray.

McG’s stock has gone done since his promising feature film debut with Charlie’s Angels in 2000. Seems he has trouble just controlling his crew, judging by Christian Bale’s having to apologize publicly about going ballistic to maintain decorum on the set.

Bale, by the way, heads a star-studded ensemble which also includes Sam Worthington, Helena Bonham Carter, Jane Alexander, Common, Terry Crews and Bryce Dallas Howard. T-4’s point of departure is 2003, the year in which T-3 was released, but the story soon shifts to a flattened California in 2018 where we find the few folks still alive cowering in caves and makeshift shelters.

T-4 takes place in a flattened California in 2018 where we find the few folks still alive cowering in caves and makeshift shelters. That’s because a swarm of invading terminators, Skynet’s T-600s, have practically decimated humanity. With less than four days until total annihilation, it falls to a chivalrous army vet named John Connor (Christian Bale) to organize a resistance movement. Its goal is to get close enough to the cyborgs to shut down their computers by jamming their radio frequency with the help of a top secret weapon provided by General Ashdown (Michael Ironside).

Of course, this is easier said than done, especially since the aliens have a decided military advantage and a “take no prisoners” policy. But Conner is both desperate and game and enlists the assistance of a motley crew in his heroic endeavor. His impromptu posse includes his pregnant wife, Kate (Bryce Dallas Howard), a downed fighter pilot (Moon Bloodgood), his right-hand man, Barnes (Common), a teenage soldier (Anton Yelchin), a mute toddler (Jadagrace) and Marcus Wright (Sam Worthington), a very mysterious stranger whom Connor has good reason not to trust.

But keeping the motivations of the various players on the scorecard straight is never as important as simply sitting back and appreciating all the fireworks which ensue. What we have here, to quote the Bard of Avon, is essentially “A tale told by an idiot, full of sound and fury, signifying nothing.”

To order a copy of Terminator Salvation, visit:

To see a trailer for Terminator Salvation, 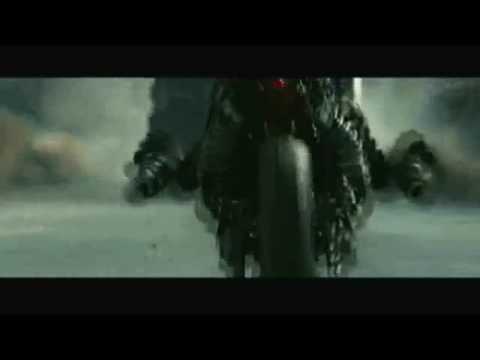