A kind of road movie to nowhere that literally goes around in circles and plays out in the course of a single day, Take Out has got plenty of baggage on board too, but most of it simmers inside the head of its solemn Chinese delivery man protagonist, Ming Ding. And like NYC based Iranian-American Ramin Bahrini’s morning coffee and donuts dirge, Man Push Cart, the tragic tale humanizes those most invisible in our midst, yet with whom we thoughtlessly connect on a daily basis.

Co-directed by Sean Baker and Taiwanese born Shih-Ching Tsou, Take Out abruptly intrudes into the life of Ming Ching (Charles Jang), as the undocumented New York City immigrant is rudely awakened in his hovel filled with fellow illegals, by the loan sharks who smuggled him into the country. Ming has fallen behind in his payments to settle his exorbitant outstanding debt, because he sent money back home to his wife and child. And to make clear their insistence that he pay up by the end of the day, they beat him with a hammer.

Ming, who toils long hours delivering food by bike from a local Chinese takeout eatery, is desperate to borrow whatever he can, and then resolves to make up the difference in tips that day by doing double delivery duty while his agreeable co-worker hangs out in the store instead. We follow along with Ming on his dreary rounds through pouring rain, where he is more often than not treated rudely, ridiculed, and stuck with stingy tips. And to muster and sustain any sense of dignity and humanity that he can, Ming nearly wordlessly detaches himself from the world around him emotionally, as a crucial survival tool against being crushed by the nearly overwhelming forces stacked against him. 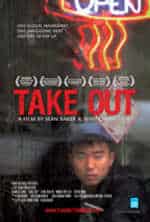 Baker and Tsou convey with a mystifying poetic minimalism this heartbreaking and sometimes brutal and terrifying world to which Ming is consigned. Rarely has the sheer oppressive monotony of work been expressed on screen with such keen compassion and subtle resonance. And with it, a kinship among workers that nourishes their will to endure and overcome.