It’s Boston in 2017, a time when people live in near total isolation from one another. Instead of ever leaving their homes, they send remote-controlled robots out into the world as their virtual emissaries. In this scenario, you are legally allowed to rely on a surrogate that looks like a younger version of yourself, although it’s a felony to control a computerized clone registered to someone else.

With nothing but cyborgs out on the streets, it’s no surprise that the world has been transformed into a virtual utopia where crime has become a thing of the past. However, the peace of Beantown is suddenly shattered when the city suffers its first murder in years. What’s curious about the slaying is that the victim is Jarid Canter (Shane Dzicek), the son of Dr. Lionel Canter (James Cromwell), the inventor of surrogates. 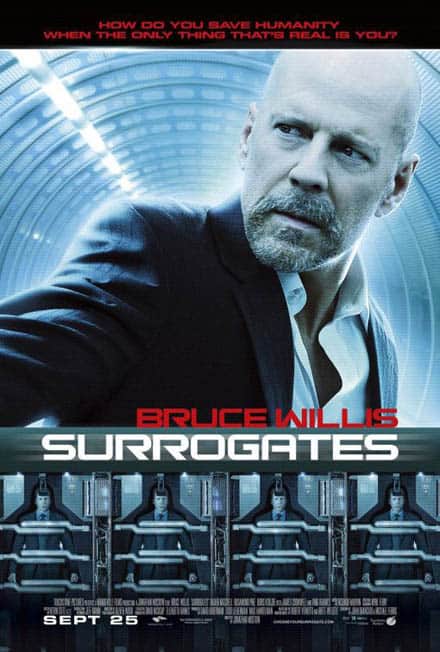 Assigned by FBI Chief Andrew Stone (Boris Kodjoe) to crack the case are Agents Greer (Bruce Willis) and Peters (Radha Mitchell). Initially, the baffled partner wonders why anyone might want the kid dead. Then, more killings occur, and the investigation reveals that the murder weapon is a high-tech gadget capable of destroying a surrogate while simultaneously liquefying its corresponding human’s brain.

Soon, the trail leads to the Dread Reservation, a sanctuary for rebels who have refused to surrender their autonomy to Dr. Canter’s race of robots. After it becomes apparent that The Prophet (Ving Rhames) must be masterminding the revolution, Greer opts to bring his aging body out of mothballs in order to take on the leader of the resistance movement, mano-a-mano. Next, his boss strips him of his badge and gun for this infraction of the Bureau’s rules. Nonetheless, this does nothing to discourage Greer from continuing the pursuit as a rogue cop.

So unfolds Surrogates, a futuristic Dirty Harry directed by Jonathan Mostow. Adapted from Robert Venditti’s graphic novel of the same name, the film unfortunately fails to live up to its promising premise. The problems start with the screen being cluttered with way too many characters (two of everybody) and the futility of asking an audience to invest emotionally in robots. Ultimately, the twists turn preposterous, and it doesn’t help that the cast can’t sell the ludicrous script.

To see a trailer for Surrogates, visit: http://www.youtube.com/watch?v=K8Co2DHPxlA