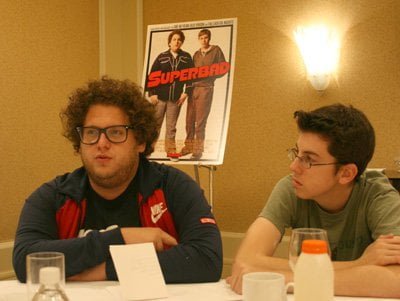 Despite their differences, high school seniors Seth (Jonah Hill) and Evan (Michael Cera) have been best friends since childhood. The former is fat, outgoing and foul-mouthed, and the latter is sweet and smart, but painfully shy.

Over the years, these dorks have grown close to each other due to their sharing a low status in the social pecking order among their peers. Now, the pals find themselves facing the prospect of parting in the Fall, which is when Seth will be heading to a state college while Evan matriculates at Dartmouth.

But preventing them from experiencing any pangs of separation anxiety over their mutual dependency is their raging hormones, the one thing the two do have in common. Despite being ostracized, they’re still typical heterosexual teens in that they’re totally-obsessed with the opposite sex and intent on losing their virginity before graduation.

The odds of that happening seem rather remote since they’re so unpopular, at least until the series of fortuitous events which unfolds via divine intervention during their last Home Economics class of the semester. First, Seth is shocked to be invited to a house party by Jules (Emma Stone), the cutie pie he has a crush on. After boasting that he can bring the booze, he accepts $100 from her, even though he doesn’t know exactly how, as a minor, he’s going to be able to buy any. 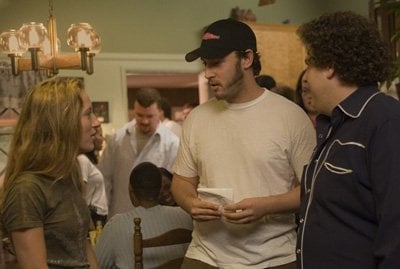 To the rescue comes Fogell (Christopher Mintz-Plasse), aka McLovin, a self-assured geek who confidently announces that he’s getting a fake driver’s license that very day. Then, Evan learns that Becca (Martha MacIsaac), a girl he’s long lusted for from afar, will be attending the soiree, too, and with that plot point established, Superbad is set for liftoff.

The series of skits that ensues might best be described as a relentlessly-raunchy cross between American Pie and Harold & Kumar Go to White Castle, a laugh out loud teensploit that’s every bit as funny as either of those classics. Like Pie, Superbad’s premise revolves around latent protagonists swapping dreams of ending their celibate state. And ala Harold & Kumar, the screwball comedy is also a road flick focusing on the boys’ frustration in their quest to purchase some liquor.

But where Superbad improves upon the recipe of those relatively-superficial offerings is in the attention it devotes to character development which, in turn, allows for the cultivation of an emotional arc, some warm and fuzzy moments mixed in with the mirth, and ultimately a satisfying denouement. So, what we have here is more than the genre’s trademark indulgence in misogyny and scatology.

Directed by Greg Mottola (The Daytrippers), this semi-autobiographical adventure was co-written by Seth Rogen and Evan Goldberg. The pair say they began collaborating on the sophomoric script at the age of 13, which explains why they share the names of the lead characters. 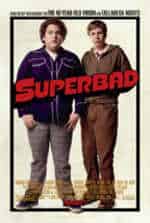 Fair warning, with the f-word being employed more than once a minute, plus plenty of additional profanity in profusion, you have to have a strong stomach for cursing to appreciate this picture. Provided you do, however, you will be richly rewarded by this “He’s gotta have it!” testosterone-fueled fantasy irreverent enough to make the 40 Year-Old Virgin look like Leave It to Beaver.