Concocting a Halloween season brew of grossout and gentle gore, Bo Zenga’s Stan Helsing doesn’t let its derivative horror get in the way of over the top humor served up spicy and raw. Which when stirring up a merry when not macabre screen alchemy, can be tricky, but in the case of Stan Helsing, is mostly a tangy treat.

Brash bottom feeder buddies, video store drone Stan Helsing (Steve Howey) and portly best friend Teddy (Kenan Thompson) set out with a mismatched pair of bubbly babes (Diora Baird, Desi Lydic) to make a video delivery to a customer before heading off to a Halloween Party. But along the way to essentially nowhere, which tends to typically befall such ill-fated characters in these sorts of mock shocker road movies, the quartet of kooky costume-clad aspiring revelers runs over a dog they mistaken for a baby bear; dodge a serial killer hitchhiker along with the homicidal dog owner; and finally end up as hostages at Stormy Night Estates, a converted old film studio harboring movie monster icons who force them into a karaoke challenge to the death. 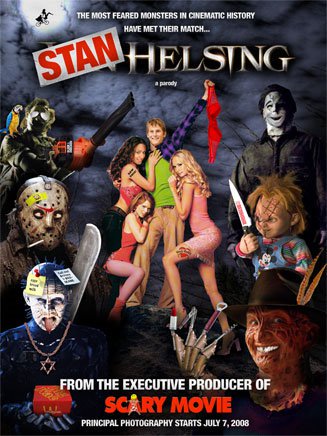 Also turning up to give the creep factor a weird comic spin, is octogenarian thesp Leslie Nielsen as a domineering greasy spoon waitress with too much lipstick.

Less shocking for its lunatic fringe psychos than the raunchy humor in plentiful supply, Stan Helsing is hip horror at its finest, though tending to sag at times midway through. While the banter is at its bizarre best when the friends get into fabulously freaky mode, just hanging together for the duration.