If you’ve pretty much declared enough with grossout comedy already and have soured on its crude extremes, there’s plenty of sweet offbeat humor to be had in the surprising and delightful little indie that could, Splinterheads. Though director Brant Sersen (Blackballed: The Bobby Dukes Story) is not at all shy about his characters breaking out in raunchy rants on occasion, there’s never a sense that salacious shock rather than sly mischief is key.

Thomas Middleditch is Justin Frost in Splinterheads, the designated geek loser still living at home with his mom in a bucolic suburb, while drudging for chump change on occasion by mowing lawns with chubby comrade, Wayne (Jason Rogel). When a carnival comes to town, Justin is smitten with hottie game booth hustler, Galaxy (Rachael Taylor). 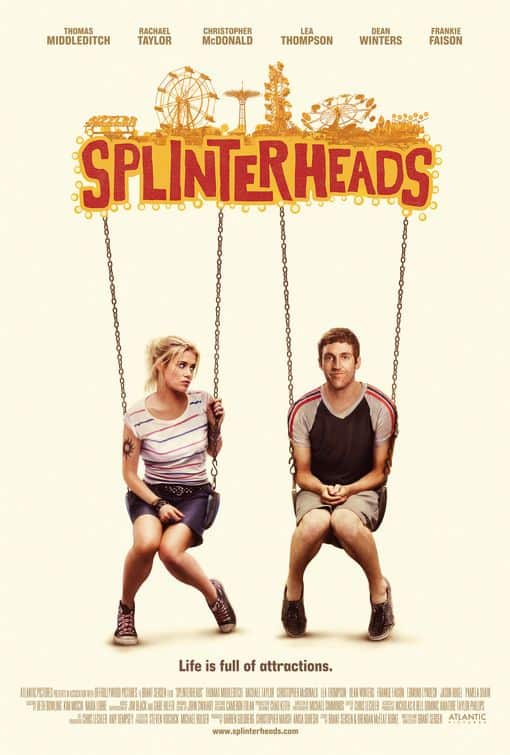 But there are a few hitches in store. Including the fact that she has seriously ripped him off in the recent past, and her con artist carnie co-conspirator trailer toughs known collectively as splinterheads in the biz, are fond of beating him up and making his life miserable in the extreme, a lot more than once.

Splinterheads boasts loads of playful characters, kooky conversations and gorgeous cinematography in the suburban wilds to spare. Not to mention the reputed oldest man in the world who just happens to be Justin’s lusty grandpa (Edmund Lyndeck), Frankie Faison as Aunt Betty’s unlikely paunchy boy toy, and Christopher McDonald as a crazed local cop with the pathological hots for Mom.