Answering the call of duty for a truly pet project where humans don’t care to tread, three high IQ hairy primates take the controls of an apparently un-manned rocket, in Kirk De Micco’s intergalactic animated adventure, Space Chimps. It’s a pleasant enough visual treat for the small fry in the audience, in a summer packed with high anxiety blockbusters just not suited to their more tender tastes.

Andy Samberg, Cheryl Hines and Patrick Warburton voice the trio of chimps in question, who try not to go ape while spacing out during their scary mission. Not exactly prepped for gorilla warfare when they get waylaid on a planet occupied by hostile aliens, these eggheads are more into brains over brawn as they go about figuring out how to get back to planet earth.

The showcase for all sorts of hi-tech hardware and interplanetary gadgetry in the movie is less interesting than too close for comfort encounters with what seem like delightfully candy-colored aliens boasting a magically surreal pastel habitat with three suns, an exploding volcano and their very own sorta Planet Hollywood party hard atmosphere.

One of the special highlights of this kid adventure, is meeting up with a highly unusual bulb-shaped creature known as Kilowatt (Kristin Chenoweth). Long held in captivity and waiting for somebody to stop by the planet and free her, Kilowatt, who communicates in humorous soprano shrieks, not surprisingly lights up when those simian saviors come to her rescue. 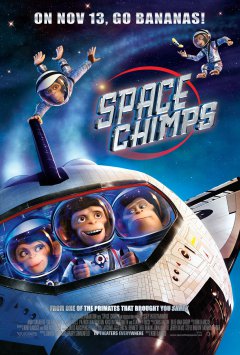 There’s also a lighthearted message for the little ones, that focuses on facing your fears instead of being scared by them. And how clownish Ham (Andy Samberg), the slacker on board living in the shadow of his famous astronaut dad, learns to stop monkeying around and show the right stuff as a capable chimp off the old block.