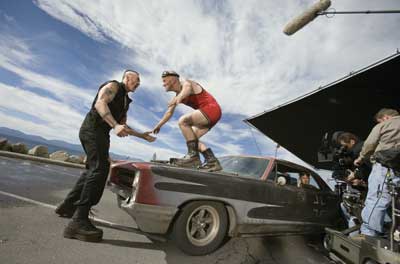 Buddy “Aces” Israel (Jeremy Piven) was a two-bit magician with a mediocre lounge act until the Mafia turned him into a Las Vegas headliner. But instead of feeling indebted to mob boss Primo Sparazza (Joseph Ruskin) for the helping hand, the creep decided to create his own competing crime organization.

Initially, Aces met with a measure of success, and celebrated by overindulging in women and wine. At least until the Feds got the goods on him. Then, rather than spend the rest of his life in prison, he agreed to turn state’s evidence. However, once word reached Sparazza that Aces was about to testify against him, the aging mobster offered a million-dollars to the first person to kill the back-stabbing stool pigeon. 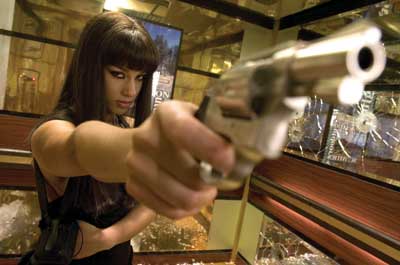 So soon, all sorts of depraved degenerates descend on Buddy’s hideout in order to be the one to cash in on the big payday. That, in a nutshell, is the point of departure of this unapologetically gruesome revenge flick. Between beaucoup booty calls, bling and bulletry, Smokin’ Aces is certainly visually-captivating from start to finish. Just don’t expect its storyline to be any more sophisticated than the typical gangsta’ rap video, and you won’t be disappointed.

Perhaps most noteworthy is the fact that the movie marks the screen acting debuts of a couple of Grammy-winners, pop diva Alicia Keys and hip-hop artist Common, who acquit themselves quite capably in support roles as a pistol-packin’ assassin and a beefy bodyguard, respectively.

The film also features a rainbow coalition of scantily-clad models seen hanging around the hedonistic Aces like refugees from a Jay-Z video. Towards the end, unfortunately, the plot makes a bizarre departure likely to disappoint those not satiated by bloodletting alone.