If art is in fact one percent inspiration and ninety-nine percent perspiration, then shine a light on director Martin Scorsese and his Stones concert documentary by the same name, for sweating up a storm while struggling to create a cinematic structure around those legendary guys who could care less, for their part rolling on through with the sheer force of will seemingly embodying a mind of its own. In other words, details, details. So you might say that for the extremely precise and meticulous Scorsese, filming the intimate yet rousing, fountain of youth freakout Stones concert for Shine A Light at New York City’s Beacon Theater in 2006, was a case of inspiration meeting aggravation. Or perhaps the inherent creative clash of music and cinema.

After a bizarre stage warm-up, when the Clintons show up with the Polish president and thirty guests in tow for Clinton’s own apparent birthday bash, and Bill gives them enthusiastic bear hugs, Keith Richards, by way of goofy introduction announces, ‘Hey Clinton, I’m Bushed!.’ By now, Scorsese as compulsive idea organizer for the evening, throws up his hands in dismay and just tags along after wherever the music takes him. Which ends up of course being not such a bad idea after all.

And though less impersonal than the usual Stones mega-stadium appearance, the concert film experience, front row seat or not for the movie audience, is weakened by the secondary, vicarious nature of just not being there. Early Stones clips of them saying at one time or another, that jamming together was simply a temporary fun gig they don’t anticipate lasting much longer, and conversely much later that they’re feeling they could go on forever, help cut away into character. 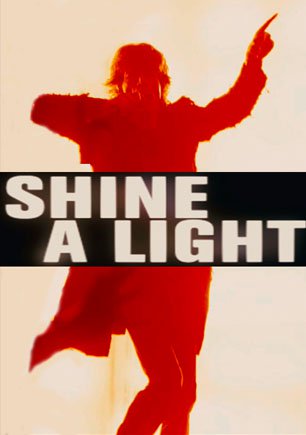 And perhaps the most touching moment, as the music courses along across memory lane and back, is the new rendition of one of the first songs Mick Jagger and Keith wrote that, Mick explains on stage with surprising sudden disarming emotion, they were embarrassed and gave away to ‘somebody else.’ The revelation and song ‘As Tears Go By,’ is followed by a nervous and wordless, clearly overwhelming embrace of each other.

Of course that somebody else, one of the first lovers for both, is Marianne Faithfull, a talented and drug addicted rising star back then who hit rock bottom, so to speak. And has weirdly enough resurfaced across town today at another, far less upscale movie theater, in a lauded performance of her own as an aging, financially strapped grandma in Irina Palm, performing sexual services in a sleazy strip club.

The Stones, on the other hand, pride themselves on their agelessness, or at least have declared their new reinvented rebellion to be switched from anti-patriarchal authority of any sort, to one against Father Time. You don’t need a weathered man to know which way the wind blows.