A figment of 19th century writer Sir Arthur Conan Doyle’s imagination that has reached nearly living and breathing proportions ever since, Sherlock Holmes and his mythic stature are shrouded in just about the same degree of enigma as any number of the cold cases he routinely set out to tackle. Holmes, in effect, is easily any writer’s or filmmaker’s dream project. In other words, an inviting palette on which to impose whatever creative wish list may be lurking in that assortment of free lance imaginations, up to the task of Sherlock’s perpetual reinvention. Enter Guy Ritchie.

Directed by Ritchie (Lock Stock and Two Smoking Barrels, Snatch, Rock-n-Rolla) with the storytelling input of no less that five writers, Sherlock Holmes the movie is visually mystifying to behold, but the sort of breathlessly flaky and convoluted irreverent slapstick yarn that would be a headscratcher even for Sherlock. So best to just savor the weird and wacky antics of Robert Downey Jr.’s cartoonish Sherlock, and leave the mostly nonsensical story to follow its own insane inner logic to pretty much nowhere in particular.

In the film, it seems that upscale serial killer Lord Blackwood (Mark Strong) has committed a series of terrifying ritualistic murders and busybody Victorian gumshoe Holmes is on the case, though Scotland Yard is not exactly enthused. And while Blackwood has been caught and executed, the murders inexplicably continue. Meanwhile Sherlock and investigative significant other Dr. Watson (Jude Law), along with Watson’s meddling American sweetheart Irene (Rachel McAdams), get caught up in all sorts of dark arts presumably conjured by the diabolical Blackwood from beyond the grave. 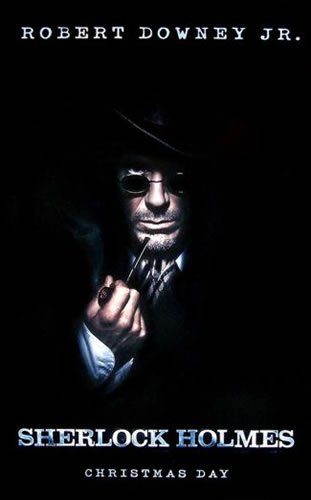 Ritchie seems to be working overtime to rough up those 19th century underworld mores predating all that 20th century semi-automatic killer hardware he’s better known for, but high speed horse and buggy chases across town somehow just won’t do. So what we have here is basically Dirty Holmes rather than Harry on acid as Victorian conspiracy theorist dabbling in hyperactive forensics, and barely up to the challenge of negotiating the chaotic new metropolis emerging with the advent of the Industrial Revolution. Making for a nightmarish surreal combination of mystical and macabre pungent in atmosphere, but with plenty of room for Downey’s trademark deliriously rude and daffy too.