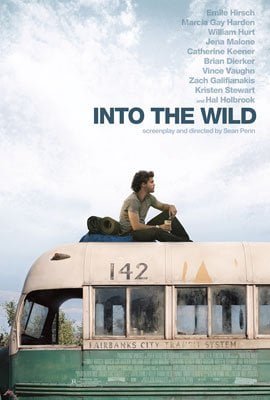 Breaking out of the modern world and fleeing towards some distant idealized destination, is nothing new in movies or literature, and has no expectation of disappearing itself as a subject, anytime soon. Earlier this year, Michael Pitt’s 19th century global merchant trekked across the planet to Japan despite grave dangers, to buy those rare, exotic worms, in the romantic epic, Silk. And three contemporary troubled brothers do likewise in The Darjeeling Limited.

Now Sean Penn has been inspired to helm a tragic mood piece about youthful wanderlust, with Into The Wild. The film is based on the brief life and death memoir of real life college graduate dropout Chris McCandless, and his fateful journey far away from a dysfunctional family and a society ‘poisoned by civilization.’ And ever deeper into the destiny of the Alaskan wilderness, and the metaphorical paradoxical anticipated freedom and disillusioning prison of the self.

Emile Hirsch is the withdrawn and sensitive young soul who reinvents himself as ‘Alex Supertramp,’ and was both lured and devoured two decades ago by Lord Byron’s seductive call of the ‘pleasure in the pathless woods.’ Had the late misanthropic McCandless come of age in the present time, he might have settled for the somewhat less lethal but equally addictive solitary excursion into cyberspace. But at that moment, escape from reality was still very much a physical notion, and the unfortunate young man had to pay with his life as he fell mortally ill without another human being around to help save him.

Penn obviously poured all his passion into this project, with nearly as much raw, naked zeal as his psychologically wounded and simultaneously inspired protagonist. But actors behind the camera are often susceptible to an excess of emotional emphasis and lack of sufficient stylistic discipline, as is the case here. The nervous narrative shifts repeatedly, and entangled points of view at times hurl this story into distracting detours that defuse the impact of the journey in arriving there, both literally and figuratively.

Into The Wild is ultimately a heartfelt and forcefully executed combo meditation and dirge surrounding one young man’s desperation to embrace human existence. But Penn should have allowed the audience more active emotional participation in discovering this story for themselves, rather than having them simply bide time as passive recipients to the sorrow and rapture of the tale.