Chris Tucker and Jackie Chan team up again, after a break of six years. The dynamic comedy duo are back with Rush Hour 3. It is well worth the wait, and fans will love it.

Unfortunately, many critics thought it was just a rehash of previous work. There was a completely different change of scenery, but that wasn’t enough to stop 80% of critics panning the effort. Fans were less judgemental, giving it an average score of 3.4/5.

In Rush Hour 3, I think the madcap adventure measures up to the prior pictures in every way. There are laugh-a-minute hijinks, and the obviously chemistry among the characters is very real. Plus there are the carefully-orchestrated fight sequences.

Even though the two detectives, Carter, played by Chris Tucker and Inspector Lee, played by Jackie Chan, are just up to their typical tricks, it is reassuring to see them in action together again. And that is even when you have a good idea what to expect. This is where I think many critics miss the point. A good part of the pleasure comes from watching the two clowns perform as expected, with a great dose of slapstick.

The story begins in L.A. where, where motor-mouth Carter has been demoted, and is now directing street traffic. Lee is once again guarding the Chinese Ambassador Han, played by Tzi Ma, just as in the first Rush Hour. An assassination attempt on Han’s life leaves him seriously wounded. Lee promises the diplomat’s now-grown daughter, Soo Yung, played by Jingchu Zhang, that he will track down the shooter.

The trail leads to a gang of Asian mobsters in Paris, and our heroes soon reunite and make their way over to France to crack the case. The mismatched partners immediately resume their oil-and-water bickering, a winning study in contrasts in which high-strung Carter’s constant trash-talking, womanizing and general incompetence is offset by Lee’s relatively low-key demeanor and suave savoir fare.

A third stooge is added to the mix after they land in Europe, when George, played by Yvan Attal, an insolent cabbie with an attitude, becomes their regular driver. He can’t hide his contempt for American culture, and his presence not only infuses the film with some fresh energy but provides some of its most memorable moments of comic relief.

As always, the brand of humor relies on simplistic stereotypes, associating Asians with eating rice and speaking pidgin English, blacks acting the fool and being well-endowed, and now, the French with smelling and being rude. Fortunately, in the hands of director Brett Ratner, the material never crosses the line into being meanspirited. It is the sort of good-natured ribbing unlikely to seriously offend any ethnic group.

Despite the wafer-thin plot, at least the crime caper is compelling enough to keep you amused until the very end, though this is a flick to be savored scene by scene, for this joke, for that car chase, or for the grand-finale, a death-defying leap off the Eiffel Tower.

One of the great rewards for real fans is at the end. Stick around for the credits, and you’ll love the last few minutes of highly entertaining outtakes.

Rush Hour 3 is the best buddy-cop comedy since Rush Hour 2. 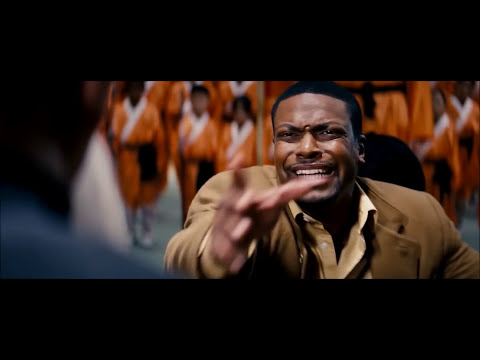