In a film that retells the story of India’s national trauma (Partition of 1947), interwoven with the psychological trauma suffered by the best known individual track and field athlete India has produced, Milkha Singh, who was orphaned in the riots that followed in a village near Lyallpur, Punjab (British India), the director Rakeysh Mehra of the ‘Rang de Basanti’ fame has made a historically relevant film that is bound to receive world-wide critical acclaim.

Milkha Singh (played by Farhan Akhtar) was born in 1935 in what is now known as West Punjab. He was 12 years old at the time of the Hindu-Muslim riots that ensued after the partition of India and Pakistan, following the independence from the British rule. He lost both of his parents in the sectarian riots. Except for an elder sister (Divya Dutta) who in effect became his in loco parentis or legal guardian, Singh came of age as a runaway and rebellious child.

He finally matured about the poverty of his living conditions. When confronted with the challenges of adulthood, he joined the Indian army. In the army, he found his path as an athlete, a world-class runner, and managed to break through the limitations of his social conditions and what the film director has appropriately called his ‘lost childhood.’

In the film, when Milkha Singh finally qualifies to join the Indian team – while running on injured feet and ankles, without athletic shoes or little professional training – we realize the huge odds he was running against when India was just an underdeveloped society. As he collapses to the ground, he claims “Milkha has now become India.” His life indeed inspired the generation of my grandparents and parents for whom the partition was a living memory. Mehra has done a national service by retrieving the life of this Indian folk hero from the pages of history for the next generation, who may be more familiar with the image of Washington or Franklin on a dollar bill than Gandhi or Nehru on a rupee.

“Because India is not a very sporting nation, it is important to retell the story,” Mehra said. “I grew up on the Milkha Singh story as a regular staple of my diet and this inspired me to make the film.”

Mehra intimately narrates the life history, while capturing the human spirit of “The Flying Sikh,” an accolade given to him by the then premier of Pakistan (General Ayub Khan) after he defeated his Pakistani counterpart (Abdul Khaliq). Aptly locating the narrative within the context of a fledgling nation that was just discovering its newfound wings, in Milkha’s struggles to win 77 of the 80 races he ran throughout his career, we see independent India’s attempts to carve out its own path in the Asian hemisphere and the larger Anglosphere.

And that is what Milkha Singh did all his life. He ran and ran and kept on running. He did not look back, except at a fateful moment in the 1960 Rome Olympics, which may have cost him dearly. He lost the 400 meter race by less than a micro-second and failed to secure a medal. After qualifying in the race with the second best timing, losing the Olympics has haunted him for the rest of his life.

Mehra said during the Q&A session, Milkha Singh had nightmares before the race, due to something unknowable and mysterious tugging at his anxious soul. Here, Mehra relies on personal and historical memories of the partition to recreate the dark and bloody scenes that Milkha witnessed as an impressionable boy.

The dark memories that propelled him to do his best against a traditional adversary (Pakistan) may have become a liability on a larger stage against competitors that were neither his enemy nor his foe. In the very act of looking back around the 250 meter point in the 400 meter race in the Rome Olympics, Mehra suggests, Milkha Singh lost the edge he needed to win. Less than .1 second kept him from attaining a medal.

Milkha Singh himself has said, the two of the worst memories of his life have been losing his parents and losing at the Rome Olympics. He felt dejected and cried profusely after both events. The gentle yet tightly woven strings that bind our lives together also have knots that can rupture anytime. But on the whole, the stories I heard as a child of Milkha Singh’s graceful life are faithfully rendered in Mehra’s film. It is a must see film for all global audiences that may or may not be interested in sports heroes.

When I suggested to Mehra that the film is very psychological in its treatment of Milkha Singh’s early trauma, he said, “Everything in the film is factually correct.”

Similarly, when I followed up with a political question about what type of larger political statement the film was trying to convey at this time, he was quick with a reply. He said, “Yes, the conflict between the two countries (India and Pakistan) has gone on for too long. It is time to end it” … “I have so many friends across the border. And the food over there is so good.

Why can’t we just open the highway, and let people travel.”

Very much like his other films, Mehra relies on an international cast to draw in the audience. Milkha Singh’s father is powerfully acted by the Pakistani British actor Art Malik of “Jewel in the Crown.” Milkha was known to be a ladies man; his Aussie girlfriend is played by Rebecca Breeds. One of his other female friends is beautifully represented by the Pakistani actress and singer Meesha Shafi. 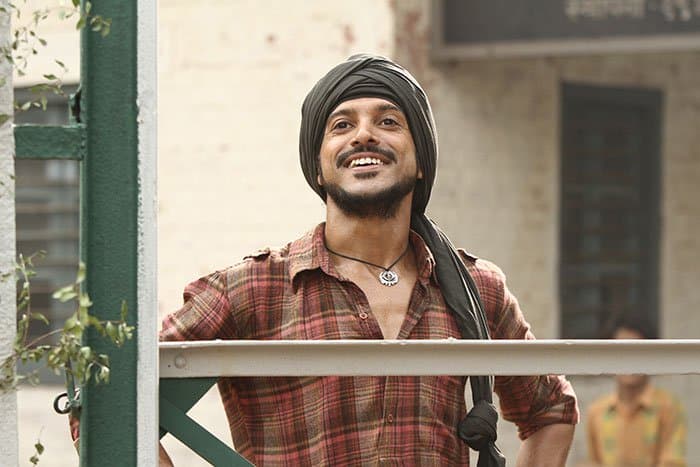 Veteran Indian film and theater actor Dalip Tahil dons a Nehru cap and jacket as the first Prime Minister of India, who manages to convince Milkha Singh to return to Pakistan for a friendly race between the two neighboring countries. His two coaches, ably played by veteran Punjabi actor Yograj Singh and Delhi stage and TV actor Pavan Malhotra, provide the motivational glue that pushes the story forward.

After Milkha Singh himself watched the film, he told Mehra, “Yaara, tu mainu amar kar deta hai.” (Friend, you have immortalized me.) Milkha Singh has indeed become a living legend. After watching the film and hearing this story, the audience at the Tribeca Cinema in New York City, responded with a thunderous applause.

Whether the film will create a rapprochement between Indian and Pakistan is not clear. However, it is not an exaggeration to suggest that this biographical film will inspire thousands, if not millions, of young Milkha Singhs to become athletes and take up running through the gullies of India’s towns and villages.