If honor among thieves seems like an outdated notion, for UK screen mobster maven Guy Ritchie, there couldn’t be a more incendiary narrative device around. And his latest homoerotic guy bonding homicidal spree RocknRolla, might be termed a London mafia musical fueled by global capitalism’s shaky economic indicators, going toe to toe with the underground urban economy’s crimelords in cutthroat competition. Literally.

More open air lunatic asylum with macho attitude than coherent thriller, the movie is also wallpapered from end to end with an incessant garage rock classic vibe. You know, just in the highly likely case that audiences tune out the non-musical side of things. So with as much effort applied by the director also known as Mister Madonna to the raucous backdrop beat as to front and center beatdowns, RocknRolla imposes a split personality effect on audiences, teeming with sheer audiovisual overload. 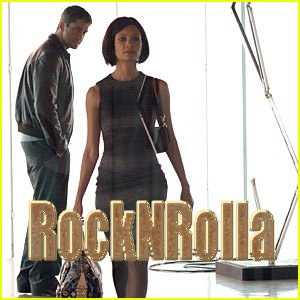 But running economic interference on Lenny’s shady underworld habitat is Russian real estate terror tycoon, Uri Obomavich (Karel Roden). Enter brainy hottie accountant Stella (Thandie Newton) to potentially even the score, a freaky femme fatale who may have more on her mind than arithmetic. And showing up occasionally for pathological detours into extreme family dysfunction of both the gangland and DNA variety, is mysterious junkie rock star Johnny Quid (Toby Kebbell) who may or may not be alive but does have an undetermined connection to a big bucks stolen painting of dubious artistic value nevertheless.

Then there’s Ludacris and Jeremy Piven, playing American rock promoters who seem to be trying to figure out most of the time, how they ended up in this movie. Also around to lend menace to the proceedings when not hanging out with Leonardo DiCaprio this same opening week over at Body Of Lies, is cinematically diversified Mark Strong as Lenny’s attack dog underling.

RocknRolla, according to our kinky cinematic tour guide through these manic, murky lower depths, is some kind of flashy postmodern gangbanger with a new brand of attitude. But as far as this movie is concerned, it’s not much more than a noisy retro-knockoff of Ritchie’s Snatch, Revolver, and Smoking Barrels.