Whether serial killers are born or made, or who knows, maybe even channeled into like-minded legit pursuits, remains in question about this combo scary and puzzling pathology. Who has never had hunches, for instance, about the sheer secret delight of surgeons and dentists chopping away at assorted patient body parts. And a policier brain teaser like Righteous Kill, much in the vein of Christopher Nolan’s Memento, has just that sort of thing in mind, toying around with the notion of killing evolving into pleasure, or the other way around.

And Righteous Kill, if nothing else, stands as the long awaited re-teaming of Robert De Niro and Al Pacino on screen since The Godfather, Part II, and with barely a chance to be savored in Michael Mann’s Heat, as the two tear into the screen when not into each other. Though this story is not for those afflicted with attention deficit disorder, as director Jon Avnet (88 Minutes, Up Close & Personal) and screenwriter Russell Gewirtz (Spkie Lee’s Inside Man) mischievously play hide and seek with assorted plot threads, putting you in the investigative driver’s hot seat for the duration. 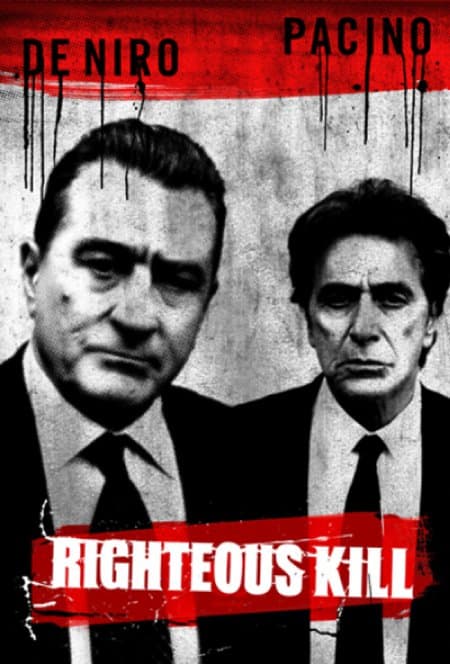 De Niro and Pacino are Turk and Rooster respectively, two jaded NYPD detectives and longtime partners and friends with suspicious ties to some unsolved cases. They’re also not above going to inappropriate extremes to collar a perp, including when cornering provocative drug dealer Spider (50 Cent), so frustrated are they with the snail’s pace bureaucratic tendencies of the criminal justice system.

And the trail leading to the pair heats up when papers with handwritten original verses justifying the executions of a designated bad guy at each crime scene, start turning up. Which leads to suspicions by fellow police like Officer Perez (John Leguizamo) and Turk’s off the job kinky rough sex lover, forensic detective Corelli (Carla Gugino) who likes him to role play criminals in bed, that they’re dealing with a taunting compulsive murderer, very likely a vigilante cop, who comes to be dubbed The Poetry Killer.

Equal parts gritty old school crime thriller and flashy seductive post-modern whodunit noir, Righteous Kill delivers the goods, even while being at times too heavy on the talk. An added treat is viewer enjoyment of the inner danger junkie of these two formidable ballsy living screen legends. Including the somewhat devilish pleasure of pro-vigilante confessional interludes delivered by De Niro, with those monstrous shades of Taxi Driver’s Travis Bickle resurrected.