Desperate times call for desperate measures. And times are getting pretty desperate for Tamara (Irina Potapenko), a Ukranian call girl plying her trade in a Viennese brothel, and her boyfriend, Alex (Johannes Krisch), an Austrian ex-con who works there greeting her Johns at the door.

Not surprisingly, both find this arrangement somewhat unsatisfying. Besides the obvious fact that she’s sleeping with lots of strangers, they can’t even let on that they are in love, because her pimp, Angel (Aleksander Reljic-Bohigas), has expressed a romantic interest in Tamara himself. The straw that breaks the camel’s back is when Alex overhears his lecherous boss asking her to satisfy him orally on the spot. 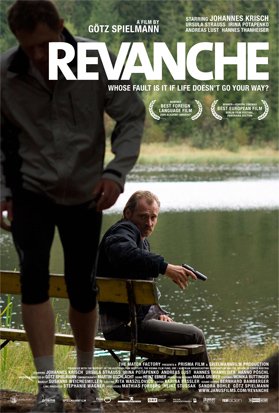 What to do? Tamara can’t quit, since she’s $30,000 in debt. So, Alex hatches a cockamamie plot to rob a bank. Only after he reassures her repeatedly that “nothing can go wrong” with his “foolproof” plan, does this proverbial hooker with a heart of gold reluctantly agrees to participate.

However, as Robert Buns once said, “The best laid plans of mice and men often go awry.” While Alex is inside the bank pulling the heist, a cop (Andreas Lust) saunters over to the getaway car quite by coincidence and strikes up a conversation with the gorgeous gun moll. Alex soon arrives with a big bag of loot and, pointing his pistol, forces the officer to lie on the ground as they drive off.

But then the patrolman jumps to his feet and empties his revolver in the general direction of the auto. And Alex’s exuberance over escaping turns to regret when he realizes Tamara has taken a bullet to the head.

This sets the stage for some sweet revenge in Revanche, a tawdry tale of lust, loss and revenge directed by Gotz Spielmann. For, as luck would have it, Robert the cop and his wife, Susanne (Ursula Strauss), happen to live in the same rural village as Alex’s hideout on the farm of his aging, accordion-playing grandfather (Johannes Thanheiser).

Things are about go from bad to worse for the couple, who were already emotionally-estranged because Bob’s been shooting blanks in the bedroom. Now he’s so distraught over killing an unarmed woman in the line of duty that takes a leave from the force for psychological reasons, and starts hanging out at the local pub as therapy.

The plot thickens, tensions rise, and the surprising developments of this cleverly-concealed whodunit lead to a resolution so intriguing it’s hard to resist the temptation to spoil the ending. A mesmerizing masterpiece which eloquently meshes the raw, super-realism found in Eastern Promises with the manipulative, mental chess moves of David Mamet’s House of Games.

In German and Russian with subtitles.

To see a trailer for Revanche,