Perhaps because his directorial debut, House of Games (1987), was one of the best psychological thrillers ever made, we continue to have high expectations of David Mamet over twenty years later. Consequently, a mediocre offering like Redbelt turns out to be a major disappointment, despite the fact that it might be better received coming from someone with a less-regarded reputation.

The picture represents Mamet’s first foray into the martial arts genre, although his character-driven script still boasts the basic trademarks by which the Pulitzer Prize-winning playwright’s work is readily recognized. This means the screen is littered with an ensemble of street-savvy con artists delivering raw dialogue staccato-style, all frequently repeating their lines for the effect of emphasis. And among the actors are some familiar faces from the Mamet repertory company, including his wife Rebecca Pidgeon, Joe Mantegna, Ricky Jay and David Paymer. 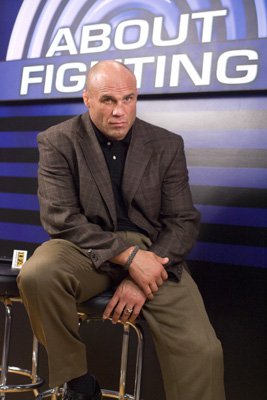 As usual, the pretzeled plot embroils the players in a complicated caper calling for considerable gray matter to unravel. It’s just too bad that, in this instance, the elaborate scam has so many layers that the audience is likely to tire of the cinematic charade well before the intricate premise has even been completely established.

The story revolves around Mike Terry (Chiwetel Ejiofor), the cash-strapped sensei of a jiu-jitsu dojo located in downtown Los Angeles. He’s a purist who has thusfar staunchly resisted any temptation to fight on the mixed martial arts circuit, preferring to rely instead on financial help from his Brazilian wife’s (Alice Braga) fabric business to keep his fledgling studio afloat. 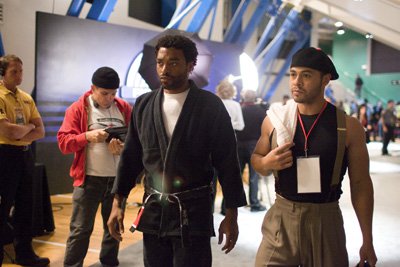 A disturbing chain of events is triggered the day that a distraught attorney (Emily Mortimer) shows up at the academy unannounced. For Mike’s most promising student, an off-duty police officer named Joe (Max Martini), inadvertently invades the fidgety female’s personal space, not knowing that she’s a recovering rape victim. The paranoid woman reflexively grabs his gun lying on a counter and shoots out the place’s pricy plate glass window. Already behind in rent, now Mike has this added expense to deal with.

Later, at a local watering hole, he instinctively comes to the assistance of a stranger sucker-punched by a bar patron. The grateful victim happens to be a famous movie star (Tim Allen) who befriends the Good Samaritan, has him over to the mansion for dinner and offers to introduce him to some of the movers and shakers in the world of showbiz. 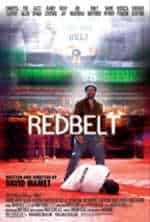 Meanwhile, Mike’s money woes mysteriously mount, so that by the time he finds himself suddenly indebted to loan sharks the question is no longer if, but merely when, he will break his code and finally enter the ring to raise some much-needed moolah. Like an unnecessarily confusing and convoluted cross of Rocky and The Karate Kid, Redbelt is a flick that’s a tad too smart for its own good, given the simple message it is designed to deliver.

I can’t really in good conscience recommend a headscratcher I had such a hard time following myself.

Rated R for profanity and violence and drug use.