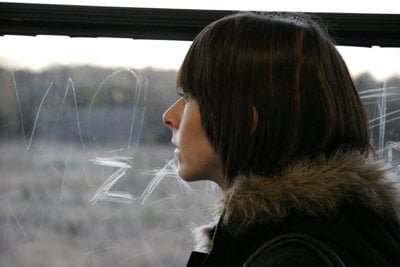 Jackie (Kate Dickie) was left traumatized and emotionally numb by some unnamed tragedy which has befallen her. Now, she works nights dispassionately monitoring a bank of monitors connected to cameras hidden all over her working-class neighborhood in Glasgow, Scotland.

Given her disconnect from reality, Jackie’s job as Big Brother is a perfect fit, because she never has to interact with other people in a meaningful way. Instead, she can fulfill her function simply by notifying the police as soon as she spots any suspicious behavior on a screen.

This position has simultaneously turned her into something of a voyeur, for she allows herself to be aroused by zooming-in on copulating couples who think they’re secretly sharing a moment of intimacy up against a wall in an abandoned alley or an empty parking lot. After hours, Jackie intermittently indulges herself in a car with a married colleague she’s been having an affair with, but those shallow encounters don’t really do anything for her beyond providing an outlet for a momentary sexual release. 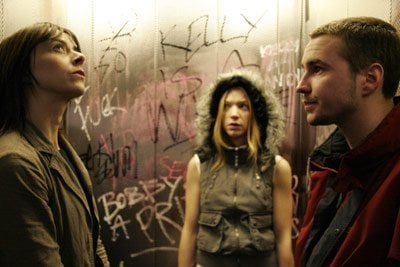 Otherwise, the lonely woman doesn’t appear to have much of a personal life, at least until the day she spots Clyde (Tony Curran) on a closed-circuit camera, sampling the services of a streetwalker. But rather than report the crime, Jackie opts to investigate this case herself, and soon we see her stalking this new object of her curiosity.

Although, she is slow to reveal the reason for the sudden obsession, it is readily apparent that this man must somehow be connected to the source of her deep-seated depression. Unraveling that mystery is the raison d’etre of Red Road, a riveting psychological thriller written and directed by Andrea Arnold. 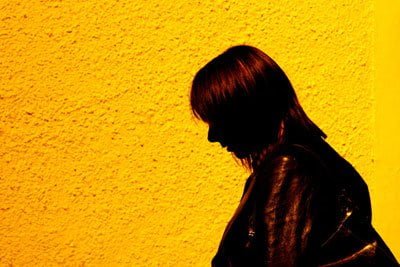 Arnold, who won the 2005 Academy Award in the Short Film category for Wasp, makes an unforgettable, feature-length debut with this cleverly-concealed character study which won the Grand Jury Prize last year at Cannes. What makes this multi-layered masterpiece memorable is Jackie’s convincing transformation from damaged goods into a wanton temptress conflicted about whether or not to use her body to gain the confidence of this recently-paroled ex-con.

The question is how can she be sure that, in the process of feigning vulnerability, she won’t actually fall for this disgusting creep who has caused her so much pain? Revenge as the sweetest taboo!