The second recent movie about making war on Korea and the only one that gets it right without being ridiculous or repugnant – though not without its own satirically sharp observations – is John Boorman’s simultaneously bold, bittersweet and elegant Korean War era British screen memoir. Or in other words when it comes to Korea, The Interview, you’re no Queen And Country.

The film is adapted from a period in Boorman’s own life back in the 1950’s, when primarily perplexed young men were begrudgingly conscripted into the army. And to not only unfathomably fight other people’s battles in an essentially anti-communist American war in Asia intent on cornering both North Korea and their Red Chinese ally – but to prop up the crumbling British Empire as well, in the distant colonialist realms of Africa and Southeast Asia.

Callum Turner stars as Bill in Queen And Country, a rebellious recruit in league with a rowdy posse on an army base, biding their time with pranks and awkwardly propositioning local women, until such unclear moment when they will be sent into inexplicable battle. Boorman grasps this opportunity to actually mount an incidental battle of his own domestically, ridiculing a military hierarchy ranging from nasty to nonsensical. And pulled off with malevolent glee by the likes of David Thewlis and Richard E. Grant.

And in the midst of the Cold War, Bill’s cynical when not irreverent outspoken joint aversion to both ‘war and the class system’ sends him on a collision course with the military brass, and interrogation by a visiting team from the UK version of the CIA, known as MI5. Which only reinforces his distaste for a national belief system increasingly without a soul. 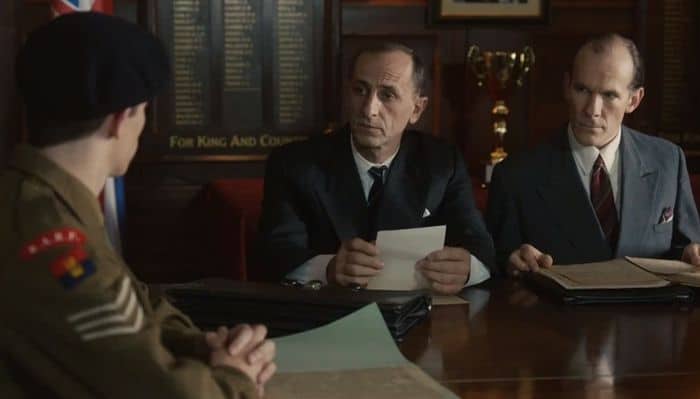 Boorman, with his incisive analysis of human violence in movies like Deliverance, also brilliantly conjures in a metaphorical narrative thread running through the film, petty, punitive squabbling by the military officers over a stolen clock on the base. Which encapsulates succinctly and rather sadly, the terrible, destructive rationale nations engage in, to perpetuate murderous wars on the planet.

And though Queen And Country never actually proceeds to Korean battlegrounds, there is no need to. As the story evokes the after-effects of the horrors of war right at home – and youth scarred and destroyed psychologically and physically in the process.

And with the title itself reflecting a sorrowful mood of endless and groundless war into the present time. And a confounding lack of confident leadership, conviction or direction, epitomized in the film with the sudden the death of George VI who never actually wanted to be king – and became so unexpectedly following the abdication of his brother King Edward VIII, in 1936. And, ensuing replacement with his daughter Queen Elizabeth, essentially by default.

Along with, in hindsight as a pall cast upon this narrative, that the United States imposed an economic blockade against North Korea these many decades, attempting to starve the country into submission. And perhaps as a vendetta as well, for the US not winning the Korean War. In which the US and its British allies killed one tenth of the population there – 290,000 North Korean soldiers and nearly three million civilians – for perhaps nothing more substantial than possession of a purloined clock.

Continuing syndicated features of Arts Express: Expression In The Arts are hosted by Prairie Miller, and air locally and nationally on the Pacifica Radio Network and WBAI/Affiliate Stations, including WPRR Public Reality Radio. And if you’d like to Express yourself too, you can write to: [email protected]