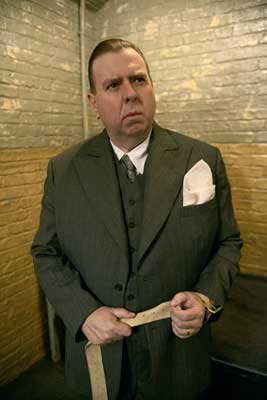 Between 1933 and 1955, Albert Pierrepoint (Timothy Spall) was a hangman who perfunctorily pulled the lever on the trap door beneath the feet of 608 men and women sentenced to death by the British legal system. He had inherited the grisly family business from his father and uncle, both of whom had previously performed the same duty in service of the Queen.

Exhibiting a steely resolve unmoved by begs for mercy, Albert was apparently so efficient at doling out each death penalty in seconds that he quickly rose through the ranks to become the country’s number one executioner. Yet, he also performed this morbid task with a certain air of nobility, always allowing the condemned to die with dignity.

Pierrepoint – The Last Hangman presents an empathetic portrait of this complicated figure, chronicling the mounting toll which his work in the gallows gradually took on his psyche and private life. Because he had a day job as a delivery boy for a grocery store, few initially knew he also moonlighted as a state-sanctioned angel of death. 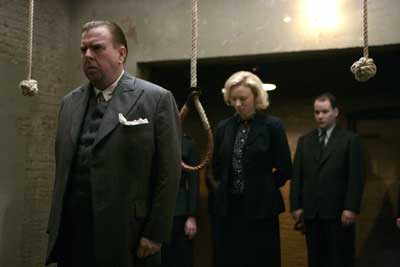 Al’s wife, Annie (Juliet Stephenson), only agreed to her hubby’s taking the gruesome gig in the gallows on the condition that he never talk to her or anyone else about it. Of course, this meant that he had no constructive way of dealing with all the emotional baggage building up inside of him.

Everything came to a head when he lost his anonymity after taking the assignment to execute over 200 Nazi war criminals. Suddenly, he was a celebrity with a certain notoriety. However, the distaste that most of his acquaintances had for his profession left him without any friends.

“Ultimately, Al withered in the face of the ensuing loneliness and

mounting public pressure on England to abolish the death penalty. And he

lost his enthusiasm entirely after having to hang a pal, so he resigned from

his post, seemingly wishing he’d never gotten into the profession in the 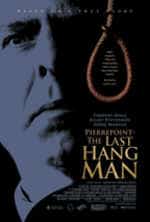 Overwhelmed with regret, he would later state, “The fruit of my experience has this bitter aftertaste – . Capital punishment, in my view, achieved nothing but revenge.” Oh, and it put food on the table for the Pierrepoint family, too.