In no way a disease of the week weepie, or contemporary mutilation of the screen classic in question either, Phoebe In Wonderland does delve into childhood affliction and fantasy, but with an utterly enchanting and sensitively crafted poignant touch of first time writer/director Daniel Barnz. The filmmaker also succeeds in amazing with never less than convincing multiple emotional points of view in which flawed human beings aren’t pigeon-holed as saints or sinners.

Evidently following in the footsteps of her precocious older sibling Dakota, ten year old Elle Fanning is Phoebe Lichten, a troubled suburban schoolgirl experiencing symptoms that include obsessive compulsive step climbing and handwashing till her skin bleeds, uncontrollable hurling of insults and spitting at schoolmates when they tease her, and a fixation on roof ledges while trying to keep herself from jumping off them. Her parents (Felicity Huffman and Bill Pullman), who seem to have their own fixations on their writing careers, are more often than not into denial about Phoebe’s behavior, dismissing her episodes as phases she’ll grow out of eventually. Or, perhaps the result of a child with a creative mind of her own, mirroring her own parents as dedicated nonconformists. 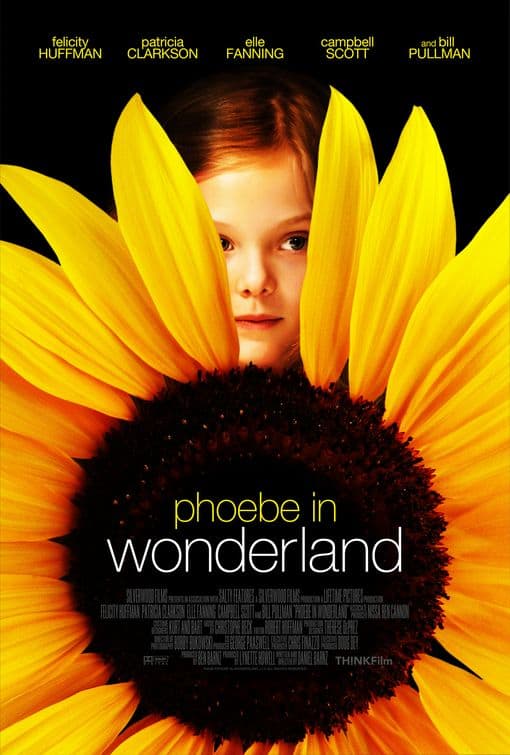 Always on the verge of being thrown out of school, Phoebe, who does indeed have the family DNA of a gifted imagination, is drawn to the new drama teacher, Miss Dodger (Patricia Clarkson), who is intent on mounting a student production of Alice In Wonderland. The two rather whimsically minded kindred souls for whom everyday reality is merely an impediment to creative inspiration, magically bond when Phoebe is chosen to play Alice, a situation which sparks maternal jealousy in her alienated mom, and overall exasperation on the part of the school authorities, who assess in the teacher’s captivating influence over these children, a pathological loon. Think Andrew Fleming’s adventure through the weirdness of youth academia in Hamlet 2, but without the oddball banter set to music.

Very much like its literary predecessor, Phoebe In Wonderland is equal parts mystical and mysterious, with a delightfully out of focus child’s perception of the world guaranteed to give adults some philosophical pause for reflection on the ethereal nature of acceptable reality. And though the narrative detours at times into overwrought episodic flights of fancy, Elle Fanning’s poetically expressive performance is simply exquisite to behold, an Alice luminous with wonder indeed.