Possibly the unanimated screen cousin followup to Kung Fu Panda, Paul Blart: Mall Cop answers the pressing question – Can a chubby guy be a superhero too – in the resounding affirmative. TV’s King of Queens lovable working stiff Kevin James relocates to suburban Jersey in an even larger than life silly but good natured laughathon on the big screen as the corpulent crimefighter mall cop in question, who’s more than a little obsessive about cornering anyone shopping around for trouble.

Blart is also a single dad duped into a green card marriage by an even more rotund illegal alien femme fatale, who left him to raise preteen daughter Maya (Raini Rodriguez) alone. But he’s showered with plenty of maternal doting, emotional support and platefuls of food at home by both Mom (Shirley Knight) and surrogate parentally inclined Maya. 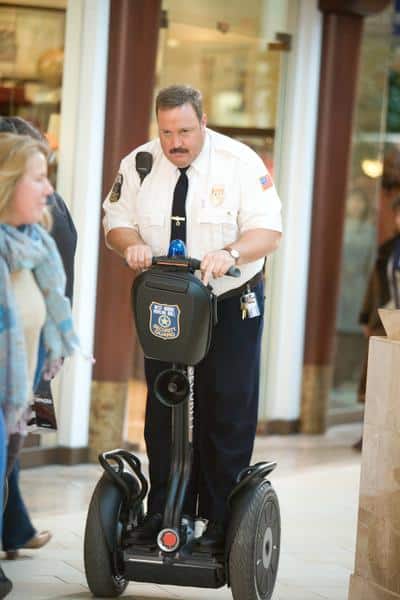 And though the family is eager to match him up with a mate online, Blart wears his heart conspicuously on his sleeve at work, nursing a crush on perky wig saleslady Amy (Jayma Mays). But running interference on his courtship moves, is a gang of cutthroat shoplifters who show up one day, intent on conspiring a hostile takeover of the premises on skateboards, and committing assorted acts of mall malice.

Not to worry, Blart singlehandedly sets his sights on finally getting a chance to seriously show his stuff chasing down these athletic accomplices. Which includes making the most of his mountainous assets like gargantuan sliding and slithering around the mall, and flattening the felons with the advantage of his ample torso, when not beating up a perp with a handy tanning machine. He also gets a little help from a jar of some sort of wickedly spicy condiment called The Devil’s Crotch, enough said.

Paul Blart: Mall Cop is an affectionate if often sitcomish ode to creative copping and mindless mall madness. In any case, James sweats it out lifting the material above the mundane and derivative, and nicely proves that in an emergency, size matters and extra large superheroes can rule.