Paradise: Love is the initial offering in a trilogy of incendiary dramas from the Austria-born director Ulrich Seidl. Each of the three installments focuses on a different female from the same family.

This episode revolves around Teresa (Magarete Tiesel), an unremarkable single-mom whom we find tired of her Vienna existence at the point of departure. The jaded 50 year-old divides her time between raising an adolescent (Melanie Lenz) and working with the mentally-handicapped. 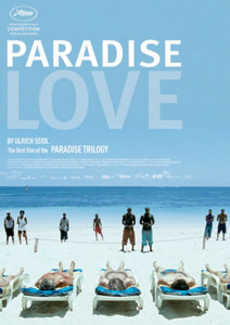 Needing a break from that humdrum routine, Teresa leaves her daughter in the care of a sister (Maria Hofstaetter) before flying alone to Kenya for a much-needed vacation. However, she’s planning for a little more than fun in the sun, since her destination is a resort that caters to the carnal desires of European sex tourists.

Specifically, it’s older white women looking to get their groove back, so to speak, with help of African men, the younger and better endowed the better. The goal, obviously, is less to find romance than to mate with any hunks who find them attractive.

Upon arriving, Teresa checks into the hotel where she makes the acquaintance of several fellow Austrians with the same goal in mind. What soon unfolds is a series of lusty liaisons approached by the consenting parties with a compatible set of competing expectations.

The women want to be wined and dined a bit prior to seduction, while the local lads are more than happy to oblige with the unspoken understanding that they will be tipped generously for providing stud service. Given the language, age and cultural differences, it is no surprise that complications still ensue for first-timer Teresa as she awkwardly attempts to negotiate her way with fellows with hidden agendas.

Will her cravings be satiated? Will she be respected in the morning? Will she be fleeced out of every last pfennig by the local Romeos? Those are the basic questions raised over the course of this intriguing character study, a female empowerment flick which harks back to Heading South (2005), a similarly-themed film set in Haiti starring Charlotte Rambling.

Fair warning: the film does feature graphic nudity and indiscriminate coupling, as the ladies sensuously sample a veritable smorgasbord of native cuisine. When all is said and done, Teresa returns home revitalized enough to resume her unfulfilling life, but ostensibly having to keep her assorted sexual conquests a secret.

After all, as the saying goes: What happens in Nairobi, stays in Nairobi!

In German, Swahili and English with subtitles