Thuy (Pham Thi Han) is a 10 year-old orphan who lives on the outskirts of Saigon with her mean Uncle Minh (Nguyen Hau). Instead of letting his niece attend school, he makes her work alongside him inside a bamboo factory all day, and he takes every penny of her pay to boot.

Somehow, the precocious young girl senses that she couldn’t be any worse off if she ran away, in spite of her uncle’s stern warning that, “You wouldn’t last one day on your own.” And when she finally gets fed up, she packs her belongings in a pink backpack and travels by taxi boat to Saigon where she quickly learns how to survive by selling postcards and fresh roses.

There, she eventually crosses paths with Lan (Cat Ly), a pretty stewardess staying in town on layover for five days. Thuy can’t believe that the pretty woman doesn’t have a husband or a boyfriend to buy a flower for. Lan, in turn, finds it hard to fathom that such an adorable child could possibly be homeless, so she invites the poor orphan to share her hotel room.

Meanwhile, Thuy makes another pal in Hai (Le the Lu), an animal trainer who lives in a shack right on the grounds of the zoo. He gives the sophisticated street urchin the grand tour of the premises while confiding in her about his personal problems. Not only has he been dumped by his girlfriend but the beloved elephant he’s raised from infancy has just been sold to a zoo in India.

Lan happens to be just as unhappy, because she’s been stuck in an unsatisfying affair for four years with an airline pilot (Trong Hai) who refuses to leave his wife for her. A solution to all three’s woes might turn on whether Thuy can arrange a blind date between the two lonely hearts. For, if they fall head over heels for each other, who knows, maybe they’d marry and adopt the tiny matchmaker who introduced them. But this, of course, is easier said than done, since Hai still pines for his ex, and Lan’s layover lover is expecting to rendezvous with his mistress while in Saigon.

Directed by Stephane Gauger, Owl and the Sparrow is an enchanting fairytale which delights to no end en route to its syrupy sweet resolution. The serendipitous front story aside, it is also a pleasant change of pace to see a film set in Saigon which isn’t a high body-count splatter flick about the ravages of the war in Indochina.

Worthwhile, if only for the reminder that the Vietnamese are people, too!

In Vietnamese with subtitles.

To see a trailer for Owl and the Sparrow, visit: 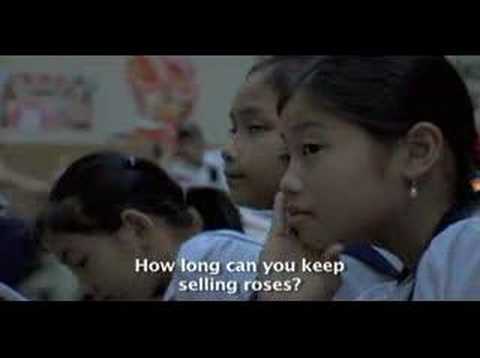