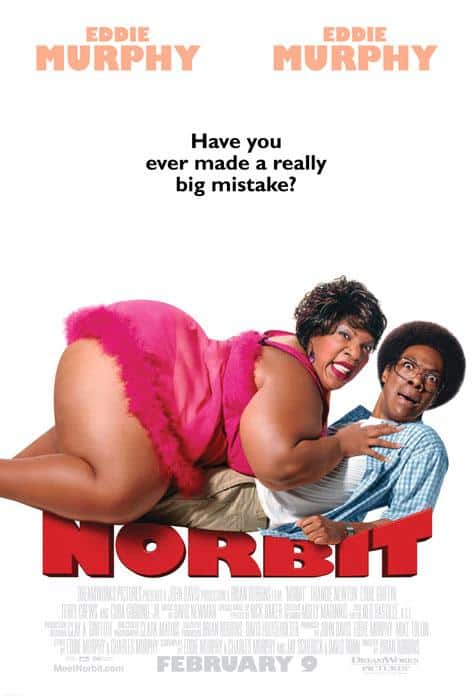 Playing more than one more person in a film is nothing new to Eddie Murphy. He handled two roles rather brilliantly in Bowfinger, and met with as much success cast as eight in Nutty Professor I and II. Because in the past he’s appeared to be quite comfortable cross-dressing and wearing a fat-suit for the camera, it is rather surprising that Norbit would turn out to be such an unmitigated disaster.

The story opens with a babe in swaddling clothes being abandoned by parents who toss him out of a car on their way home from the hospital. Norbit is rescued and raised by Mr. Wong who refers to the tyke in pidgin English with lines like “You very ugly baby. Ugly black one. You be here long time.” thereby setting the table for the crude romantic comedy’s prevailing tone which makes characters with darker skin the butt of virtually every joke.

Norbit’s early childhood is nearly idyllic because he and another orphan, thin and light-skinned Kate (Thandie Newton), are inseparable playmates, at least until she is adopted and whisked away forever by her new family. Her presence is replaced by fat and ugly Rasputia whose saving grace is that she protects him from playground bullies.

With the help of her beefy big brothers (Terry Crews, Clifton Powell and Lester Speight), Rasputia pressures a reluctant Norbit into marriage when he’d prefer to hold onto the faint hope of a reunion with Kate. So, it’s not hard to figure out how this fairly predictable fairy tale will turn out by the end of the third act, when Rasputia gets just what’s coming to her while Kate and Norbit waltz off into the sunset.

Of far more interest is the nature of the humor, here, which seizes on every opportunity to demonize and denigrate our overweight antagonist. For example, when Norbit introduces his bride, he is greeted with “You married a gorilla!” On another occasion, when he asks his expecting wife about the pregnancy, she simply farts loudly, and then says, “There’s your child.”

But most of the laughs are generated by sight gags, like when Rasputia is stopped from entering a theme park because her rolls of fat are covering her bikini bottom, making it appear that she is naked from the waist down. Eddie can’t complain about the demeaning script, since he co-wrote it with his brother, Charlie.

The screenplay includes offensive dialogue between two gaudily-dressed pimps, named Lord Have Mercy (Katt Williams) and Pope Sweet Jesus (Eddie Griffin) with a license plate which reads “SELLNHOS” and a whorehouse called Beds, Bitches and Beyond, get it? Consider this exchange between the pair when a young white girl falls out of the sky from nowhere.

Lord Have Mercy : “My prayers have been answered!”

Pope Sweet Jesus: “My prayers are for a Cadillac.”

This, and nearly every other joke falls flat, squandering the services of Oscar-winner Cuba Gooding, Jr., Marlon Wayans and more in the process, leaving one to wonder how such an ill-fated adventure ever got off the drawing board.