While the economy tanks and workers are getting dumped and downsized, Ben Stiller gets upgraded in Canadian director Shawn Levy’s Night At The Museum sequel: Battle of The Smithsonian. No longer the minimum wage museum security guard drudge Larry Daly making ends meet on the nightshift at NYC’s Museum Of Natural History, Daley has turned creatively minded gadget inventor. The same cannot be said of Levy’s inventive inclinations in this movie.

It seems that Stiller’s still basically stuck in the first movie, in night of the living displays mode, with little that’s different or amazing to impress audiences beyond some additional hi-tech wizardry. This, while primarily substituting jokes and punchlines for storytelling and characters you feel prodded to chase around the museum, when you may still be feeling exhausted from last week’s underground endless jaunt, through the cavernous crypts of Vatican City in Angels & Demons. Since when did road movies relocate indoors? 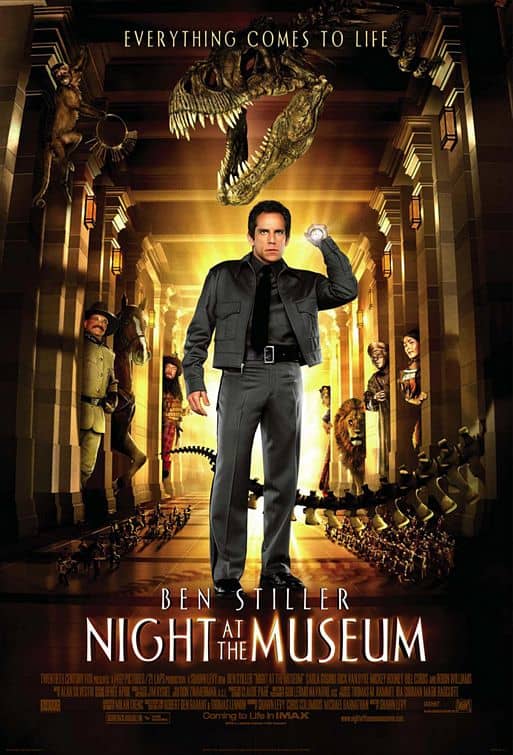 In what passes for a fairly lame pretext to sequelize the original, Daley heads off to the Smithsonian Institute in DC a few years later, where those museum exhibits have been sent for storage. And they appear to be in need of a bit of rescuing from the likes of Pharoah Kah Mun Rah (Hank Azaria). The Egyptian rabble rouses has got some intimidating accomplices too, including Ivan The Terrible and Al Capone.

Night At The Museum Battle of the Smithsonian: I See Dead Props, along with a story that could have used some pick me up too. And with artifacts gone wild, as the museum cross-pollinates with Toys R Us.