The first movie this year to go toe to toe with the looming financial crisis and those who suffer its effects most – the increasingly discarded workingclass – New In Town ironically has more to say about how that crisis impacts the masses of people in this country, than the commercial media. Which on the contrary, only seems to identify with the plight of CEOs who must resign themselves to one less Mercedes in their corporate fleets this year. And though flawed in a number of ways during takeoff, the immensely labor-friendly story irons out many of the dramatic kinks as it coasts along to the inspiring finish line.

Renee Zellweger is Lucy, a take no prisoners Miami executive who toughens up to play with the corporate good old boys club who seem to merely tolerate having her around as a kind of managerial second class citizen. So when a rep from the company is needed to head out to downsize one of their failing plants in deep freeze rural Minnesota – and like right now – Lucy gets the odd man out treatment. And mainly because the con-sensus of the conspiring suits, is that she’s a single woman who doesn’t really need to bother about trifles like the approaching holiday season. 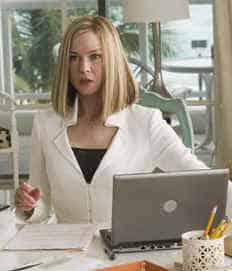 Upon her arrival, not only does Lucy find herself have to contend with being thrust into the position of villain fall guy for the company when getting orders to shut the plant down, but there’s also the daily blizzards and accompanying embarrassing see-through frozen nipples morphed into, well, human icicles, and a typical small town where there’s no such thing as a personal question. Not to mention a local population that turns against her as she’s poised to eliminate away their collective livelihoods.

There’s also the feisty factory union leader and widower, Ted (Harry Connick Jr.), who squares off against Lucy in class warfare over the dinner table. And after mockingly exchanging city versus country, red state/blue state caricatures about one another, Ted rants angrily against the robber barons of capitalism while she smugly extols the self-made man. A more than surprising heated sociopolitical conversation that could have leaped out of a dramatic ideological debate in a Ken Loach movie about mass popular uprising.

And despite the chilly turf, Lucy, a kind of borderline but thankfully not quite dragon lady in distress, eventually warms up to these country folk and their cause, and the hunky union guy too. But to director Jonas Elmer’s credit, he sets up the conventional love story as secondary to the triumphant class conscious solidarity of blue collar stiffs who take over their factory. And signify that workers know a thing or two themselves, about fixing a badly broken economic system.

Whether it’s a case of bad judgment in promoting stereotypes of often simple minded white country bumpkins with grating accents on the part of the African American director who should know better about caricaturing, or just actors who never quite got the knack of speaking in that idiom, Elmer seems to relax as the narrative moves along. And by the time the characters tone down the accents and Lucy switches off for a bit from spiked heels to snow boots, the locals in turn settle into more authentic and respectful personalities, much as the factory irons out its problematic kinks and conveys the courage and dignity of its dedicated laborers.