The Jacob’s Pillow Dance Festival traces its roots back to the Thirties when it was founded on a farm nestled in the Berkshire Mountains by the legendary Ted Shawn (1891-1972). He envisioned the retreat as an oasis where modern dance might be practiced, choreographed and performed as a legitimate art form independent of classical ballet.

Other than being derailed by a temporary setback during The Depression, the festival’s stature grew steadily over the ensuing years. In 1942, Shawn built a theater in a converted barn so that patrons could enjoy modern for modern’s sake, independent of the distracting trappings of a big city opera house. 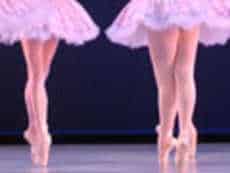 Narrated by Bill T. Jones, this alternately educational and entertaining documentary divides its time between concert footage and informative interviews with industry icons like Merce Cunningham, Bill Irwin, Paul Taylor, Judith Jamison and Suzanne Farrell. We learn that dance is definitely a calling and not a life for anyone who wants a secure career path, since you’re always just an ingenue or an injury away from losing the limelight forever.

Jamison reminds us, however, that to reach the top, you have to be more than merely technically adept. You need to be among those rarest of talents also capable of touching the human spirit.

Modern dance appreciated as a sacred endeavor enabling one to fly above the fray, if not literally, vicariously, at the very least.