Somewhere at the crossroads between the hunger for love and food in America that Chinese writer/director Wong Kar-wai’s My Blueberry Nights savors perhaps a little too whimsically, there seems to be more than a bit lost in translation. Wong (In The Mood For Love, Happy Together) tries his hand at his first English language film, a romantic road movie on a related quest for a sense of place and belonging. But the characters feel unfamiliar and foreign in this outside looking in, kinda funhouse mirror noirish lite perspective, and not just simply uprooted. Though esteemed eclectic guitarist Ry Cooder’s moody jazz backdrop does do some distinct damage control, when these meandering vignettes tend to overstay their welcome.

Performer Norah Jones, daughter of the late Indian sitar legend Ravi Shankar, tests the waters in her first starring role as Elizabeth. She’s a sulking young New York City woman just dumped by her lover, who finds a shoulder to cry on, along with the most delicious blueberry pie in town, at a corner diner. Which happens to be presided over by an attentive and in turn hopelessly smitten Jeremy (Jude Law), who’s into a lot more than just serving up his fetching customer’s every culinary desire. 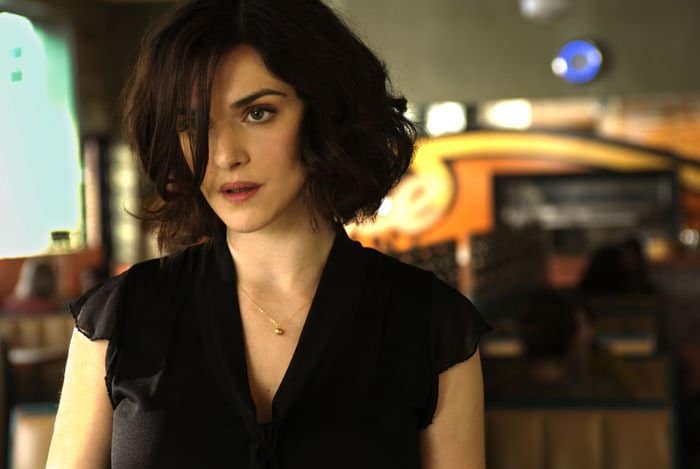 But Elizabeth, whose unbelievably clueless about Jeremy’s infatuation, heads out of town to waitress in Memphis, hoping amnesia about her heartbreak will set in. And later to Vegas, after hard bitten, down and out gambler Leslie, played with a rather grating edge by Natalie Portman, offers to trade her car for Liz’s bank account, to squander at the poker table. But not quite ready to part ways with her vehicle, Leslie demands that Liz drive her to Vegas first.

At the same time, a local Memphis slut (Rachel Weisz) walks out on her cop spouse (David Strathairn), which drives him to drink and suicidal tendencies at Liz’s joint, wouldn’t you know it. And back at that cafe in New York City, a forlorn Jeremy dials up every eatery in Memphis inquiring if there’s an Elizabeth on the premises, hoping to lure her back to town with one of his tempting slices of pie.

My Blueberry Nights is all over the map in more than just its cross-country itinerary, and these stars are all far too good looking to imagine them as unrequited lovers or perpetual losers. But that blueberry pie sure looks awfully good.