And now Water Lilies has arrived in theaters, an admittedly occasionally poignant but reprehensibly lewd and voyeuristic cinematic obsession with teenage sexual and emotional turmoil. In other words, a filmmaker can request minors to posed nude and indulge in sexual behavior for the camera, however simulated, that would land anybody else in handcuffs. So ironically, the MPAA goes to great lengths to create a stringent regulatory system as to what minors can see in movies, but not what they can do on screen. 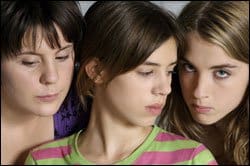 French director Celine Sciamma’s film debut Water Lilies, is a coming of age tale playing out around swimming classes at a suburban Paris high school. Three glum teens in contrasting states of physical maturity, also represent the most deplorable generic female caricatures. There’s the popular beautiful blonde bitch (Adele Haenel) who screws everyone in sight but is also frigid and possibly a closet lesbian; the shy, mousy introvert (Pauline Acquart) who looks about twelve and may or may not also be a lesbian, feeding her erotic fixation on other females by hanging around the pool ogling the bathing nymphettes when not stealing and sniffing the garbage of her primary girl object of desire, and later deflowering her as a favor; and finally, the chubby, slovenly outcast and butt of ridicule (Louise Blachere) who divides her time between stuffing her face, what else, and luring the handsomest high school hunk into hot sex because she’s desperate for any male attention.

Though her eventual act of revenge against her sexual humiliation is as ridiculously unreal as a scene in which she buries her bra in the garden to protest her fate as the designated town fattie.

In the end, one comes away from Water Lilies with absolutely no idea who any of these young girls are aside from their carnal sexual urges. How do they feel about the world around them, what joys in life fill them with wonder, who are their families and nurturers, what books are they reading? Minor details this filmmaker apparently couldn’t care less about.