Title: Flags Of Our Fathers 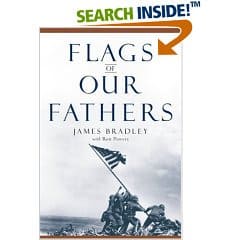 It was a work that nearly never made it to the silver screen. Steven Spielberg owned it at the point the two directors met at a Govenor’s Ball two years ago. Clint assured Steven the movie could be every bit as good as the inital book published back at the crest of the new millennium, penned by Ron Powers and James Bradley.

Eastwood, who had tried to option movie rights some time past brought his passion to the Spielberg meeting and as they say in Hollywood the deal was done.

So many of us know the story so well there’s little point in boring readers with a litany of plot points. Cutting to the chase, or the end, our side won. 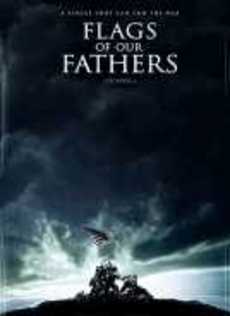 As you watch “Flags of Our Fathers,” and I hope you will, with your sons and daughters provided you believe it won’t traumatize them, they are bound to wonder as did I, in light of modern day; what the Japanese version would be like? Regardless of how one feels about such a tenacious struggle there were like it or not heros on both sides.

From the U.S. view, this is an honorable irrepressible portrayal of United States history some will undoubtedly find themselves uncomfortable with. Yes, it was indeed a monent that defined American heros. Alas, as Eastwood sets the stage to illuminate their acts of unselfhiness the film gets hacky. Ultimately, by becoming umbrageous, it closes a wound on the soul of our flag. Canadian Adam Beach is extraordinary helpful in offering that.

Let us hope our future wars won’t again create such scars for new generations to bear. Here as in “Band of Brothers, we at least feel some hope that today’s caoutchouc war will be the last. Before we close any book though it’s only fitting to once again pay tribute to our own war weary veterans.