I know screen stars are taking time out from their charmed lives in droves lately for twin births, like the fertility pills responsible for them are about to be phased out. But can we knock it off already with the mandatory mommy movies?

Following on the heels of the odious Knocked Up, And Then Came Love and now Baby Mama, where successful career women settle for jerks or sperm banks just to have babies to die for, is Eric Styles’ Miss Conception, which hysterically (as in hysteric) mulls all of those fertility options above, and more. C’mon you romantic comedy guy filmmakers, it’s just not funny. Or particularly romantic.

Heather Graham is Georgina, a giddy when not nervous wreck thirtysomething Brit with her very own construction company, but no babies, alas. When her longtime filmmaker boyfriend Zak (Tom Ellis) freaks at the thought of fatherhood and refuses to stop wearing condoms to bed (condoms, for live-in lovebirds?), she balks and he departs.

With lots of emotional support from best girlfriend lawyer and self-styled anti-motherhood advocate Klem (Mia Kirshner), Georgina visits a fertility clinic. To her dismay, she learns that hereditary premature menopause has left her with a single unfertilized egg of her own, and she has a mere matter of days to get the deed done. So that frantic expedition is on for a prospective baby daddy – gay, anonymous or otherwise – with Georgina seemingly exhausting the London telephone directory. 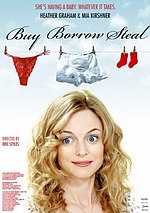 You know a movie’s in trouble when there’s a whole lot more chemistry and emotional depth between those girlfriends, than with Georgina and her uncooperative mate or any or all of those potential suitor studs. Not to mention Heather excessively and a bit creepily hamming it up like a kid on a sugar spree, whenever she anticipates that she’s about to be serendipitously laid. And will anyone who ever heard of a fertility clinic that can determine the presence of a single remaining egg – unless that clinic is run by an ex-nuthouse inmate posing as a doctor – please raise your hand.

There’s also a really tasteless depiction of a dumb as heck workingclass guy – one of upper class Georgina’s mulled prospects – that speaks volumes about the intimated class bias of the movie. Miss Conception, an ideal title to describe this thoroughly wrongheaded storyline.