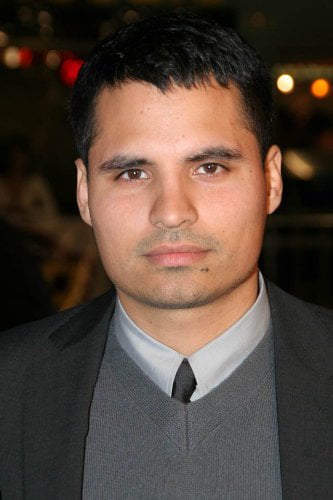 While young guys his age tend to go in for getting into a rebellious frame of mind, for Michael Pena it’s all about respect, reverence and inspiration from the older generations of men around him.

Whether it’s screen legends the thirty-one year old high intensity actor has worked with, like Robert Redford, Oliver Stone and Sidney Poitier, or his own dad, a Mexican immigrant father who’d still rather grow food than visit the supermarket.

The Chicago born rising star on the heels of his breakout role in Oliver Stone’s World trade Center, sat down to talk about his role as a soldier in Lions For Lambs, in which Robert Redford directed him and also plays his teacher and mentor, and offscreen is just a great friend to hang out with and talk about baseball. But as far as his instant celebrity status goes, at home Pena is still just the guy who’s got to go and get dad a beer.

What was it like filming in that rugged mountain terrain for this movie?

MICHAEL PENA: They put a bunch of fake snow on the mountain tops, then real snow under me. Which I didn’t get! But thinking of the men and women who actually do that, you can’t complain.

Did you meet with any actual soldiers?

MP: Yes, I met with buddies of mine who were actually in the war. That’s one of the reasons I wanted to do this movie, because it’s one thing to have one point of view in a movie. You don’t see many movies where they show why people actually go into the army.

MP: I don’t think so. I’m an actor, that’s my calling. I found doing my kind of movies inspires people. People like the stuff I do. So if it’s Crash or World Trade Center, or Lions for Lambs, as long as I keep on those things, I think it’s okay.

What about the sense of patriotism that tries to come across in the film, but doesn’t always?

MP: Yeah, there’s five different points of view. I think this was one of the reasons to do this movie. You go there for entertainment. And if it makes you think later, that’s a good thing.

How did you get into acting? Did you make a conscious effort? I heard that you beat out hundreds of thousands in an open call for To Sir, With Love 2.

MP: Really? That’s cool. I actually went to an open call. They wouldn’t book me for the lead, they said I had too little experience, but they said, I’m going to stick you in the movie anyway as a featured extra.

I was on set for a month, two months, but I was on the set with Sidney Poitier. He’s one of the classiest guys. I think that had something to do with me acting. He was a very kind, perceptive man and the movies he did I remember because they had a meaning to them.

Tell me about growing up in Chicago and does that relate to the character you play, in any way?

MP: I grew with kind of a similar background. I worked two jobs to go to prep school, and it worked out for me. Otherwise, I think we’re different in the fact that I don’t know if I would have joined the war. I have buddies and friends that have gone to war.

It’s interesting, because I’m first generation American. The thing is that in my neighborhood, all of the parents are predominately Mexican and the first language is Spanish. Their kids go out and fight in war, because they see their parents came from Mexico, and they had to fight just to get into the country.

They did it because this is the land of opportunity. So the kids want to preserve the way of life for their families and their kids first hand. It’s not like they lived in another country and had a silver spoon in their mouth. This country serves as a relief and a good source of money. And my dad works in a factory, so I think my background definitely helped in doing this role.

What were the jobs you worked?

MP: I worked at a factory that packaged soap. So it was tough. All day on a palette and all the little bottles that got filled with soap. And you had to make sure they were standing upright. And keep doing that all day. It’s monotonous.

And then I went to a library right after that, from like five until midnight. It was like seven hours. I worked like seventeen hours a day. Yeah, it was tough.

What happened when you announced to your parents you were going to be an actor?

MP: I just said, I’m going to go to Los Angeles. And they said, well why? I went, I’m going to be an actor. And they were like, okay. And I just left. I gave them two days notice.

Did you have moments with Robert Redford where you really got to know him?

MP: Yeah, he’s a buddy now. You spend three months with the guy, and he definitely knows my first name. You just get along. I don’t exactly go over his house in Napa, but when I see him we have conversations and stuff.

It’s just like co-workers, if you’re there long enough. But he’s probably buddies with everyone, he’s got that kind of quality.

What did you two talk about, politics?

MP: No, we talked about sports. He talked about Hank Aaron. That makes him a good director, because he’s right on. He tells you stories, and you get caught up in the moment. And the fact that he’s a great storyteller makes him a great director.

You know, it makes you feel like a friend of his. And I love his movies, Ordinary People and The River Runs Through It. And Quiz Show was one of my favorites of his.

What do you have coming up?

MP: I did a movie called The Lucky Ones, with Rachelle McAdams and Tim Robbins. Then I’m off in three weeks to do an Oliver Stone movie Pinkville, with Bruce Willis. It’s about the My Lai Massacre during the Vietnam War.

You’re really on a roll.

MP: Well, I worked with him before on World Trade Center. Oliver is the kind of guy when he calls, my response is, let’s do it! Let’s get into negotiations. Plus he gave me my first starring role.

Was that a pinch me moment, when Oliver offered you that big role in World Trade Center?

MP: Yeah, I think that’s why I can get along with guys like Stone, Redford. At first, it’s interesting. Each of them is like a train going, so you’re just part of that train.

I got my things going, so as soon as I walked into that room we’re off to the races. But when I first got that phone call that Oliver Stone wanted to take a meeting with me, I was like, yeah, right! Are you kidding me?

So I was really excited. He’s like done The Doors, Platoon and Wall Street. I even like Any Given Sunday. And U-Turn. For some reason I liked all of his movies. They remind me of Kubrick, but with a different twist. So yeah, I’m always surprised by his movies.

So anyway, I asked my manager, okay, where’s his office? I just could not believe her. And, what script? She was like they want you for the lead. And I was like, get out of here. It was amazing.

What makes you go for a particular role, and dive into it?

What do your folks think at this point? Have they realized they got a superstar on their hands?

MP: I’m not a superstar. But I don’t know if all this totally lands on my Dad. He was a farmer from Mexico. He’s got pickles and tomatoes in the backyard. I remember in high school telling him, Dad, you don’t have to grow that stuff. You can just buy it. So Dad, please can we play football in the back yard!

But it’s cool growing up like that. I’m showing him my movies, and we talk about something completely different two sentences later. But he’s proud of me. He loved Crash, World Trade Center, and Lions for Lambs. He said, You’re doing something good with your life, I like it. Now get me a beer!