Though master of disguise Tyler Perry is showing some decided improvement in turning out movies that aren’t shameless religious sermonizing in grossout clothing, his strongest assets as a storyteller are still not likely to reside in the main course, but rather the outrageous trimmings. As such, Madea Goes To Jail gets far more points for its sexually ambiguous bully protagonist, than its bully pulpit rudely prodding in the background, and occasionally in your face center stage.

This time around, the biggest treat is Perry getting analyzed by no less than TV’s Dr. Phil. After a series of indictable offenses requiring hilarious anger management sessions with the shrink, the incorrigible former rabble rousing plus size stripper is sent to prison. But perhaps a more constructive subject to explore with the exasperated therapist, would have been Madea/Perry’s underlying gender grudge against women, who in the world according to the prolific filmmaker specializing in agitated-prop, range from conniving to unruly. And essentially making the planet an exceedingly problematic place for men.

Another hot topic Perry skims all too briefly, is ghetto guilt, and the emerging class warfare among African Americans as the black bourgeois population continues to grow. This is a narrative strand that evolves none too smoothly side by side with Madea’s antics, as an Atlanta prosecutor played by Derek Luke seeks to rescue a childhood friend (Keisha Knight Pulliam) turned prostitute and likewise born into poverty, from a life of predatory ho daddies. And even if it threatens his pending marriage to a devious patrician fiancee/colleague (Ion Overman). On an intriguing side note, in a rare lucid moment the drug addicted hooker draws a revealing comparison between heroin and bourgeois ambition. Paging Dr. Phil. 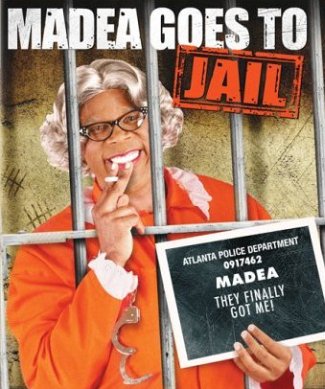 Not to worry, Tyler is not about to seize upon any alarming issues of the day, like poverty, racism or this tragic economic crisis currently in progress. Victimhood in his world view is a mere personality defect, and forget about happy endings, religion can substitute nicely and tie up all of life’s glaring loose ends instead.

And though odd as it may seem, Perry is at his funniest when not serious, in more ways than one. If he would just stick to delighting audiences with his exquisitely honed humor and wild way with words, and the lighter side of Madea Goes To Jail that is teeming with all sorts of cameo surprises likely to corner captive audiences too.