An odd screen combo of insanely silly retro-screwball humor and the bumbling antics of what would appear to be a football team of Keystone jocks, Leatherheads tackles too many topics for its own good, along with those rivals on the field. In what is becoming a not necessarily healthy routine occurrence where actors jockey for position behind the camera too, Leatherheads director George Clooney, like his attention deficit disorder, looney tunes athletes, tends to let the plot run amok, with insufficient attention to strategy.

It’s 1925, back in the day when leading lads and ladies had names like Lexie and Dodge. Clooney, in fact, casts himself as Dodge, a rapidly approaching over-the-hill football player for the Bulldogs, at a time when the game was more a free-for-all before rules sobered up the revelry. And when the sport was more a dedicated heartland labor of love with ‘miners, farmers and shell-shocked war veterans smashing each other’s skull on turnip fields,’ rather than an off-the-field contest between opposing commercial ventures. 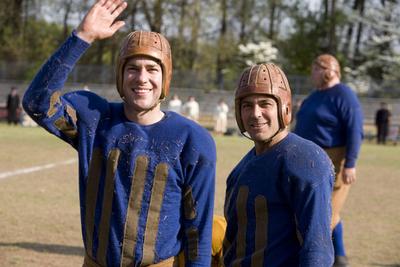 While Dodge struggles to salvage his ragtag team from extinction by recruiting Carter (John Krasinski) a pretty boy Princeton football star athlete turned WWI decorated soldier, ambitious motormouth cub reporter Lexie (Renee Zellweger) is digging up the dirt on Carter to out him as a fake war hero. Meanwhile, love sorta blossoms in its own weird way, as speakeasy lust rears its head between Dodge and Lexie, with Carter as the infatuated odd man out.

Leatherheads gets the vintage style, ragtime beat, and rapid fire cutting conversations just right, while Clooney’s pointed mockery of macho bravado, whether in sports or war, certainly sets the sight of burly guys prancing around in tights and patting one another’s butts, into a unique context. But a movie that doesn’t take itself too seriously, always runs the risk that neither will the audience, especially when calling their attention to more sobering moments in the mix.

There’s also a hint of trouble brewing ahead as the plot rolls along, when the skirmishes off the field between Dodge and Lexie come off as more interesting and attention grabbing than anything going on in the game. Not to mention that Renee as a gutsy, pre-feminist babe with sassy period attitude and stinging wit, though the opposite of a team player in any sense of the term, upstages all those sweaty gents around her. Hey, isn’t this supposed to be a guy movie?