Screen stars in interviews often brag with enormous relief, how doing voices for animated movies is a great ego booster when it comes to hiding aging and associated wrinkles, along with a few extra pounds. Not so apparently for the targeted kid viewers, at least with Kung Fu Panda. In a case of laughing at rather than with the audience, this tale of a clumsy and clownish tubby furry creature is less likely to amuse than deepen already existing anxiety and shame around the literal and figure-ative widespread small fry big appetite eating issues.

In this tale of mighty take charge deeds and ‘the search for worthy foes,’ Jack Black is the chuckling gabby guy behind Po, the aspiring Kung Fu Panda in question. The once again literal and figure-ative butt of ridicule in his village in China, Po serves up noodles at his dad’s eatery, while daydreaming about heroic opportunities in life and sneaking snacks on the sly. 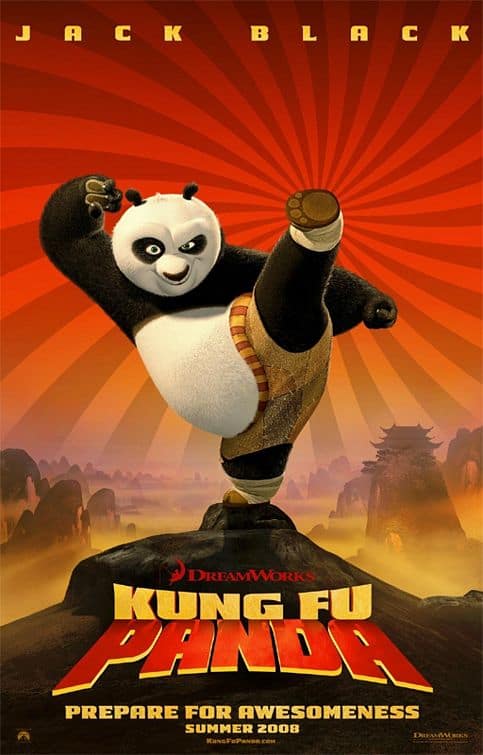 Guru Shifu does make an attempt to get Po into fighting form, but his skills mostly involve literally and figure-atively throwing his weight around and diving after edible scents, when not falling through floors and drowning his body image self-loathing sorrows in emotional eating.

Co-directed by John Stevenson and Mark Osborne, Kung Fu Panda oddly demonstrates little of the martial arts grace of real humans in its awkward animated creatures, and at the same time far too much chaotic, conventional ready-to-rumble battles and fur flying for children’s fare. And can we cut it out already with all the fat jokes dumped on sensitive young minds in movies? But there are some amusing moments, and a little sage, cultural crossover advice like, ‘Yesterday is history, tomorrow is a mystery. But today is a gift, that’s why it’s called the present.’