Switching it up from dumb and dumber action thrillers to smart alek moviemaking, Jean-Claude Van Damme braces himself for perhaps his biggest challenge ever in JCVD – surviving a whopping superstar identity crisis in collision with midlife crisis at age forty-seven. A threadbare, gritty combo self-parody confessional mockumentary, Mabrouk El Mechri’s JCVD is also likely to be headed for an instant underground classic destiny, that may very well compete with VD’s own blockbuster fare.

JCVD finds the ‘Muscles from Brussels’ iconic buttkicker returning from Hollywood to his native land in a deep funk, having blown his funds on a lost child custody case involving his young daughter, in big part because his movies are declared unfit for children. Not to mention seeing his latest role grabbed from under him by Steven Segal. And as if matters couldn’t be worse, VD stops off at a Belgian bank for quick cash, only to find himself in the middle of a robbery standoff complicated by a bad case of jet lag, and where he’s definitely not in the mood but essentially helpless to resist being taken hostage with other civilians. 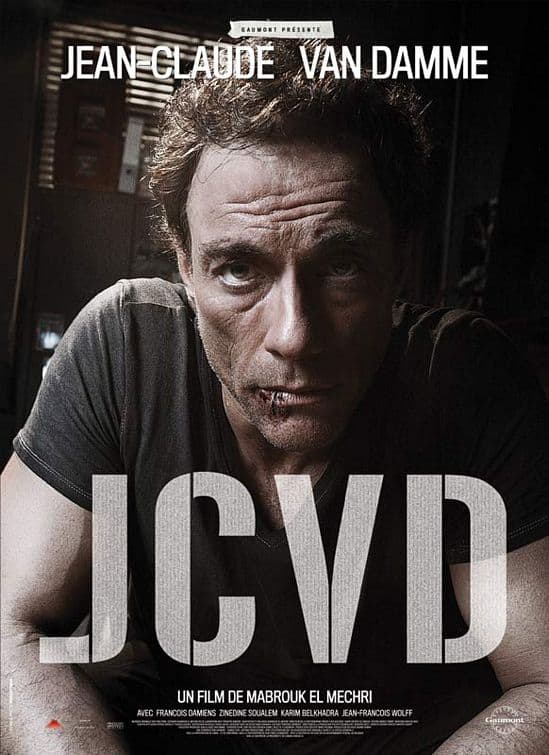 To complicate the already frantic situation, this fantasy screen action hero suddenly turned, well, aging girlie man in the real world, becomes his own worst enemy through no fault of his own, when the bank robbers force a distraught VD to play the part of co-conspirator. And since he’s already a seasoned thespian, it’s nearly impossible for VD to summon up any bad acting to at least covertly convince the staked out authorities otherwise.

While these over-the-hill amateur thieves devise basically impromptu moves they’ve lifted from any number of Hollywood action movies, VD is stuck playing the role of his career – escape artist – but is too depressed about life right now to get it together. Eventually a glum VD breaks down both the fourth wall and emotionally, whining directly before the camera about the burden of fame and how much he’d like to be just a regular guy.

An adventurous original in every sense and with a potent jazz track side dish to keep up the zany flow whenever the momentum sags, JCVD is no Dog Day Afternoon but the film possesses its own special charm. And if Jean-Claude Van Damme has been just waiting to exhale all this time, he’s certainly arrived in his own eccentric way. JCVD, a sensitive tough guy reality show with balls.