There may be no woman around better at evening up the odds around the great divide of gender inequality on screen than Meryl Streep, while also happening to be that most maligned and denigrated of females in movies, the older woman. 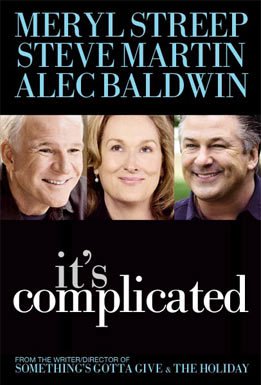 A womanizing lawyer who left Jane ten years ago after a twenty year marriage to run off with the tattooed young trophy sexpot named Agness (Lake Bell) that he’s parading around, Jake turns up once again to painfully diplomatic Jane’s dismay, when the family flies to New York to attend their son’s college graduation. But this time around he’s flying solo, having left Agness back home with her annoying, hyperactive love child, Pedro.

All of which incites in the philandering repeat offender Jake the urge to hit on his ex-wife, bad boy behavior made all the more irresistibly appealing to the faithless jerk when you factor in his libidinous addiction to extra-marital flings. And though Jane is more than wise to the incorrigible two-timer and hearing none of it, her perceptions are altered after one too many drinks with him at the hotel bar that night. End of story.

Which is where Jane’s most unwelcome affair from hell gets a tad too complicated. So is she a co-conspirator in cheating on Jake’s wife, or since the wife happens to also be the woman who helped him cheat on her, is this top secret tryst even from their own kids a guilt trip or a guilty pleasure?

To further convolute matters, a shy and insecure recently divorced architect (Steve Martin) renovating Jane’s house is pursuing her as well. So what would any self-respecting desperate housewife do to escape such a wacky situation. According to Meyers, lighting up a joint with a doting architect is the best revenge. Or rather, ‘poking smot.’ While dumping all that mature adult decorum, and growing young and reckless together again.

Though the story takes a sharp right into stern family values weepie territory at the final stretch, up until the finish line Streep as a born again hottie not about to let midlife crisis rain on her parade, is a sheer blast. While a remarkably unembarrassed Baldwin as the aging paunchy super-stud in his own mind, is totally into setting himself up as the literal butt of jokes, when it comes to macho vanity and over the hill guy nudity.