Confronting perhaps his two greatest – and strangest – challenges to date in this eagerly anticipated fourth installment, Indiana Jones faces down a nuclear mushroom cloud and also possible revelations around his brand new identity as, well, a baby daddy. And in no way a guy to let age cramp his style, this feisty senior is still into mowing down his opponents with the brain and somewhat less brawn that typifies his both stylish and zany frantic antics.

We meet up again with the daredevil university academic in the midst of the Cold War. Indiana has been kidnapped by a Soviet military regiment disguised as US soldiers, and transported via car trunk to a nuclear facility in the New Mexico desert in order to assist in divulging top secrets. Presiding over the Soviet infiltrators is saber swinging Colonel Spalko who is determined to raise her IQ by acquiring telepathic powers.(Cate Blanchett, segueing from doing Bob Dylan to an icy Marlene Dietrich impersonation). 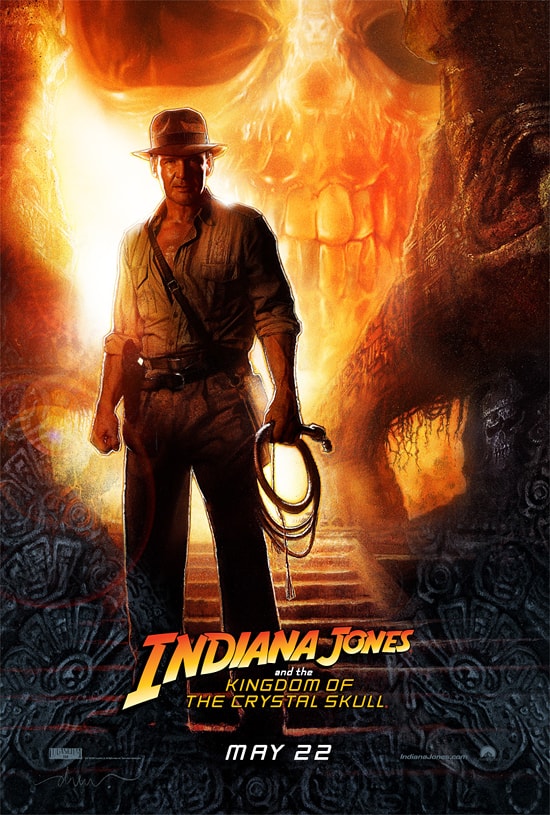 Indiana escapes via a handy flying fridge and returns home, only to now find himself a victim of the Red Scare, as he’s suspected of consorting with the KGB by the FBI and driven out of his teaching position. Disgusted with the paranoid turn the country has taken, as the government seems to ‘see communists in our soup,’ Indiana takes off for a new back-to-nature excellent adventure in search of the mythic omnipotent Crystal Skull. And he’s apparently in league with local motorcyle punk and brand new sidekick Mutt (Shia LaBoeuf), jetting off to Inca turf in Peru. And with Doc Spalko and her menacing minions in hot pursuit.

Indiana Jones And The Kingdom Of The Crystal Skull, though tempting audiences the fourth time around, feels fresh and alive as ever with its combination period charm (the Good Humor Ice Cream truck, a desert roadside Atomic Cafe, Elvis jiving, and Howdy Doody on the TV), humble heroics, kooky better-late-than-never romance, and fairly breathtaking though at times overly long clash-and-dash interludes. And yes, despite some impossibly cartoonish Soviet dumbell meanies, hokey abracadabra escapades, caricatured howling jungle tribes, and absolutely no explanation for these white guy tropical trespassers presuming a license to loot. 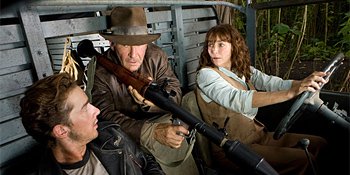 But while Indiana goes about his business shake-rattle-and-rolling around the tropics, dodging red ant stampedes, cracking secret codes and heads alike, unwrapping undead Inca corpses and separating inconceivable arti-facts from fictions as brainiacs and bad guys collide, Spielberg keeps the audience captivated for the duration. Just because there’s never a temptation to take any of it too self-seriously, a potential kiss of death for any blockbuster adventure. Not to mention that humor is always a special effects plus. So does Indie 4 rock? Da, Daddy-o.