A premarital grossout tailored for sex talk fans who may have grown older but not wiser in that arena, I Love You, Man explores the predicament of a geeky groom-to-be with guy bonding issues that seem to annoy his fretting fiancee more than him. And it’s a case of the point of this movie hardly being a point at all, but rather a pretext for the male stars getting to goof around together on screen.

Directed by John Hamburg (Meet The Parents, Zoolander) and written in guy co-bondage of sorts with sometime Seinfeld scribe Larry Levin, I Love You, Man stars Paul Rudd as reticent pushover real estate drone, Peter. About to be married and on that proverbial cloud nine, compliant loner Peter is oblivious to numerous red flags that should have been raised about his pushy, bubbly fiancee Zooey (Rashida Jones), who is bent on molding the wimp into the makeover man she wants him to be. Which means a weird prenuptial assignment that he go out and find at least one male friend like right now, so he can be as all around same-sex chummy as she is.

Basically this pal from hell scenario doesn’t go much of anywhere, and at times deteriorates even further when the yarn just seems to be hanging on by a narrative thread. And when Jon Favreau turns up as bridesmaid Jaime Pressly’s hostile, perpetually scowling mate and the unfortunate object of Rudd’s impromptu super-barf, matters aren’t helped much either to say the least. While an inserted contrived cameo in which real estate client Lou Ferrigno/The Hulk gets to face off against a flipped out Sydney who’s convinced he can deck the superhero offscreen, is about as mildly entertaining as this guy movie gets. 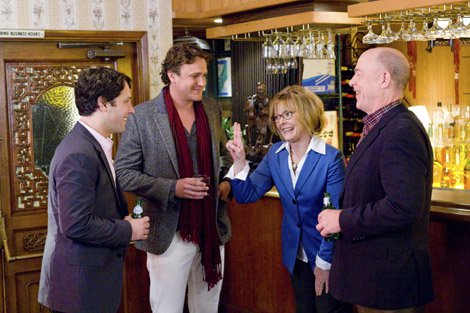 A creatively tongue-tied Rudd and brazenly wacko Segel fortunately have enough collaborative male bonding energy of their own going on between them here, to lift the generally mediocre material above its lame origins. Though what’s really missing and would have made for a meatier movie, is not the cultural habits that tend to keep men apart, but what’s got them sticking together in that exclusionary guy thing, driving females nuts in all sorts of exasperating ways.