Dona (Lucy Gallardo) is the elderly matriarch presiding over the Genoveva family which is also comprised of her daughter, Lolita (Elizabeth Pena), and her teenage granddaughter, Blanca (America Ferrara). It is the start of a sweltering summer in their sun-bleached, Arizona border town where more than the weather is set to get steamy.

Trouble is, Dona isn’t a mechanic and never even learned to drive. Lucky for her, Don Pedro (Jorge Cevera, Jr.) happens to be handy and has a lot of time on his hands. And the retired gentleman is hot-to-trot, too, so it isn’t long before sparks start to fly between these frisky senior citizens. 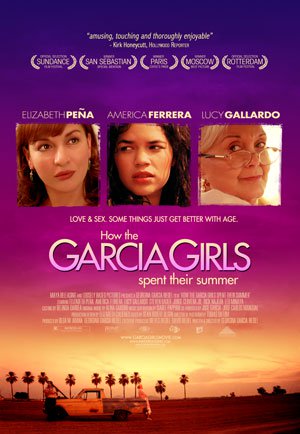 Meanwhile, middle-aged Lolita, who works the counter at the local butcher shop, has two guys interested in her. One is a secret admirer, an unassuming co-worker (Rick Najera) she barely notices and just considers a friend. She finds herself more attracted to a suave but sleazy married customer (Steve Bauer) who has shamelessly been putting the moves on her. But between being a devout Catholic and living in a tiny community where gossip spreads fast means there’s little chance she’d dare embark on an adulterous affair.

Not to be outdone by her suddenly aroused elders, Blanca sets about seducing Sal (Leo Minaya), a shy boy her own age. He’s obviously interested, but too inexperienced to know how to approach a girl. However, once she takes the bull by the horns, so to speak, and shows him the ropes, their puppy love goes from innocent to intimate so fast she has to buy an early pregnancy test.

These three relationships share the limelight equally in How the Garcia Girls Spent Their Summer, a deliberately-paced, intergenerational dramedy. Via a winning mix of understated elegance and unexpected intimacy, the film reels you in and holds your attention for the duration.

The movie marks the sensational, feature-length directorial debut of

Georgina Riedel, who exhibits an admirable confidence behind the camera in serving up such a daring depiction of lusty libertines whose most carnal of urges stand quite independent of their search for a soulmate. Perhaps the picture’s most frustrating moment arrives when the guilt-ridden heroines, like good Catholic girls, confess their every indiscretion to the parish priest (Ricky Lopez).

That concession to patriarchy notwithstanding, this female empowerment flick nonetheless affirms the notion of satisfaction as a woman’s prerogative. Bless me father for I have fornicated, and loved it!